Newly revamped Admiralty Park features 26 slides for all to enjoy 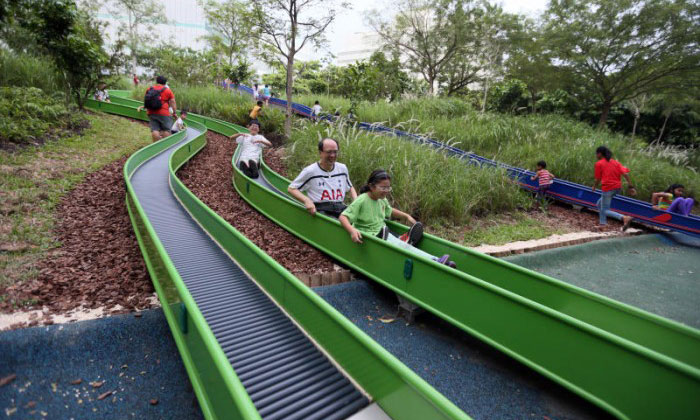 The newly opened Admiralty Park features 26 different slides for the whole family to enjoy, including those with special needs.

"The NParks has redeveloped it in line with Singapore's 'Garden City' vision since 1967, as introduced by Singapore's late Prime Minister, Mr Lee Kuan Yew."

"We've come a long way in building our 'Garden City'. Today, we have an extensive network of green spaces... 80 per cent of our residents live within a 10-minute walk of a park, we will increase the percentage to 90 per cent."

This will be the largest park in northern Singapore.

It is also equipped with colourful motion-sensor LED lights that will shine from 7pm to 11pm every day.

According to The Straits Times, the park offers a nature area, which will be opened in December and this includes new features like a mangrove boardwalk and viewing platform to encourage visitors to get closer to nature.

Parks sought around 4,000 suggestions from the public on ideas to improve their park and spent around $13.5 million on Admiralty Park's urban areas.

Most of the residents in the neighbourhood requested for more family bonding spaces while also retaining the natural greenery of the park.

This is in line with NPark's initiative to encourage more diverse and inclusive play areas for children of all ages and people with disabilities.

Sounds like an amazing way to spend your weekend with your family. Let us know your experience at the park in the comments below.

Related Stories
Resident decides to ‘decorate’ playground signage with laundry in Jurong West St 65
Huge monitor lizard is out for a prowl at Punggol Waterway Park
How in the world did they get up there?
More About:
NParks
playground
fun