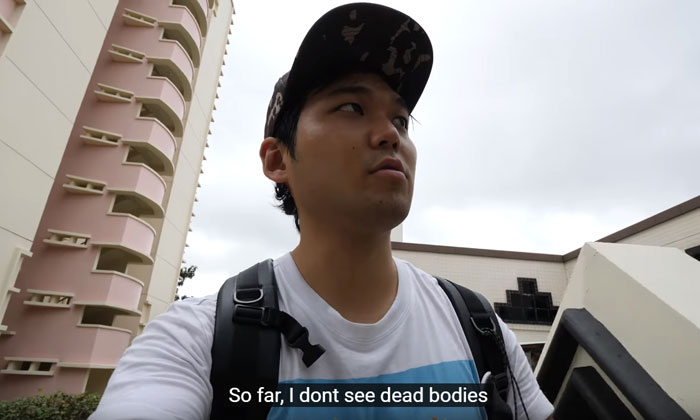 Unless you have been living under a rock, most Singaporeans are aware of the reputation Yishun has gained over the years.

Still, it is fascinating to hear what other nationalities think of the infamous neighbourhood.

Ghib describes himself as a traveller and musician from Osaka, Japan who has been living and working in Singapore since Janurary this year.

In his video, Ghib says Yishun is known as a place where a lot "weird incidents" happen.

He lists murders, cat killings and drug-related offences as some examples.

"I'm not sure if I will make it out alive but I will explore the area," he says.

In his video, the YouTuber takes a walk from Yishun MRT Station to the northern part of the neighbourhood which he said he has heard is the "danger area".

His journey takes place on a pretty quiet Monday afternoon.

Needless to say, apart from a couple of cats, he does not encounter any horses, cows or 'monster' caterpillars.

He does, however, meet a very friendly Singaporean who helps him order a plate of roasted meat with rice at a local coffee shop.

He visits a couple of temples and Northpoint City shopping mall before making his way back to the MRT station.

At the end, he reports he found no dead bodies or dead cats but was intrigued by the number (over 35) of security cameras there were at the train station.

Ultimately, he says that Yishun is a "nice neighbourhood" and would not mind visiting it again.

Related Stories
MP Louis Ng reveals the beautiful reason why there are horses in Yishun
Hot topic of the week: Yishun resident stunned by cow at lift landing: Here's likely why it was there
Hot topic of the week: Humongous 'monster' caterpillars are calling Yishun their home now
More About:
Yishun
youtube
Japanese