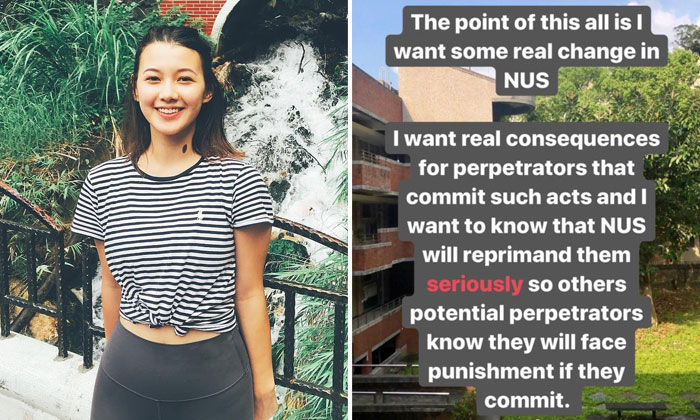 The National University of Singapore (NUS) has responded to a Stomp query regarding an undergraduate who took to social media to demand firm action to be taken against another student who allegedly took a video of her showering in her hostel bathroom.

A Stomper alerted Stomp to Monica Baey's series of Instagram Stories she posted on Friday (Apr 19).

The 23-year-old told Stomp she was taking a shower On Nov 25, 2018 at about 1.20am at Eusoff Hall when she noticed an iPhone sticking out from underneath the cubicle as she turned around to grab her towel.

Before she could react, the phone disappeared and she heard the peeping Tom dash out of the bathroom.

"I was shocked and let out a "What the f**k" before he snatched the phone away and I heard him running out," she said.

"I was really distressed and came out of the cubicle looking for help."

She added that the student who had taken the video was a friend. 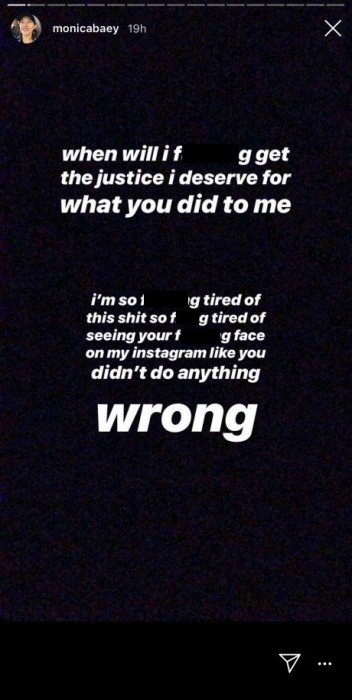 The third-year communications major said she reported the matter to the police after informing campus security.

According to her, the investigation took about two months and the perpetrator was slapped with a 12-month conditional stern warning, meaning that if he commits another crime, he will be charged for that and the earlier offence.

She added that the university suspended the male student for a semester, banned him from entering campus residences and made him send Monica an apology letter.

In his letter, which Monica posted in her Instagram stories, the man said he was under "alcoholic influence" when he committed the act and the incident has taught him an "invaluable lesson".

Monica, however, feels that the male student was let off easy and is looking for "real change".

The incident has taken a toll on her mental health and she shared she fears going to the toilet alone now.

When Stomp asked why she chose to share her experience months after what happened, she said: "I felt a severe sense of injustice as I had seen him recently on friend's instagram stories at a party and playing sports while he was supposedly meeting his sanctions during this one month suspension.

"The pain and trauma from the incident still haunts me.

"I cant even heal in peace because I know he got away with it, and hes somewhere out there living his best life."

"I want real consequences for perpetrators that commit such acts," she said.

"We are sorry for Miss Monica Baey’s distressing experience, which is of extreme concern to the University.

"We are in the process of reaching out to her to offer our support and assistance.

"What has been committed is serious and investigated by the Police and we understand that  the  male  student  concerned  received a 12-month conditional warning from the police.

"When such offences are committed, the NUS Board of Discipline, which comprises student and faculty representatives, will also conduct its own disciplinary proceedings.

"It will consider factors such as the severity of the offence, the need for justice for the victim, the rehabilitative needs of the  student offender, the safety of the NUS community, and also the decisions and penalties imposed by the authorities.

"We hear the concerns expressed by members of our community and the public about having a safer and more supportive campus environment, and recognise that advances in camera technology can be easily abused.

"NUS President will convene a committee to review the current disciplinary and support frameworks.

"This committee, which will have representation from the NUS Board of Trustees, will study the approaches taken by other international institutions, and solicit views from various stakeholders.

"We expect to share the findings of the study and follow up actions in the new academic year."