NUS student’s molest victim: 'I had no idea he wrote an apology letter' 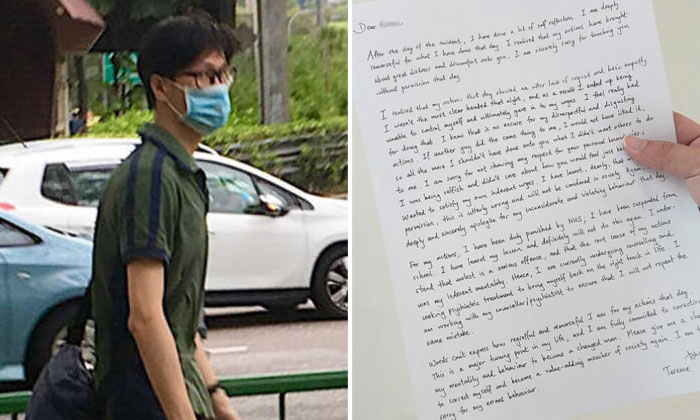 The woman molested by a university student on a train has said that she had not received a letter of apology written by the offender from him.

Shin Min sent the victim, Ms Karmen Siew, 28, a copy of the letter via a messaging app.

Ms Siew said on Facebook yesterday it was the first time she had heard of the apology.

"I was never given a copy and had no idea it existed prior to Shin Min bringing it up," she said.

Ms Siew told The New Paper that she had not read the copy of the letter sent to her.

"I think it's strange that a handwritten letter that was supposedly meant for me did not reach me, but instead got to Shin Min first," she said.

Ms Siew previously said on Facebook that she had rejected an offer of $5,000 in compensation from Siow if they could settle the case out of court.

This procedure, known as compounding of an offence, usually involves monetary compensation and an apology to the alleged victim, and effectively acquits the accused of the crime.

Siow, an applied mathematics student in the National University of Singapore, was given 21 months' probation last Wednesday after pleading guilty to one count of outrage of modesty, with two similar charges taken into consideration.

He committed the offences against Ms Siew on a train and at Serangoon MRT station on Sept 12 last year. He was also ordered to perform 150 hours of community service and his parents were bonded for $5,000 to ensure his good behaviour.

In his apology to Ms Siew, Siow said he had learnt his lesson and would not do it again.

"I wasn't the most clear-headed that night, and as a result I ended up being unable to control myself and ultimately gave in to my urges," he wrote.

Asking for a chance to reform and become a value-adding member of society, he added: "Words can't express how regretful and remorseful I am for my actions that day.

"This is a major turning point in my life, and I am fully committed to correcting my mentality and behaviour to become a changed man."

During sentencing last Wednesday, the prosecution called for Siow to be jailed for six weeks, but District Judge Jasvender Kaur disagreed.

In giving Siow probation, she described his offences as "minor intrusions" and noted the probation report had found Siow suitable for probation because of strong family support and his academic results showed his potential to excel in life.

The case sparked strong public reaction over what many felt was a lenient sentence and also why good grades had been a factor in deciding probation.

In a Facebook post last Friday, Law and Home Affairs Minister K. Shanmugam said he, too, was surprised by the verdict.

When he asked the Attorney-General's Chambers (AGC), its officers told him they disagreed with the verdict and intended to appeal, he added. The appeal was filed that day.

Noting that Ms Siew's father had written to him, Mr Shanmugam said that as a parent himself, he understood how the victim and her parents must feel.

But he warned the public not to cast aspersions on the judge.

"People are entitled to express their views, unhappiness, with the verdict, and their feelings that the punishment is inadequate," he wrote. "We nevertheless should avoid casting aspersions personally on judges - they are doing their duty, to the best of their abilities."