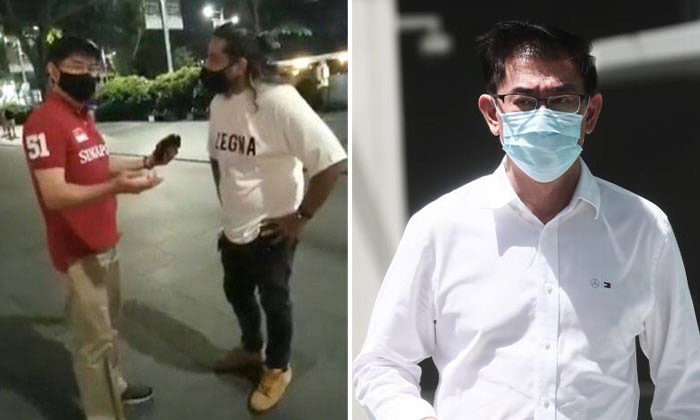 A former Ngee Ann Polytechnic senior lecturer was on Tuesday (May 17) charged with one count of wounding racial feelings and two of making comments prejudicial to the maintenance of religious harmony.

Tan Boon Lee, 61, is accused of making racist remarks to Mr Dave Parkash, 26, in the vicinity of Angullia Park in Orchard Road on June 5 last year.

Mr Parkash, a Singaporean who is half-Indian and half-Filipino, was with his girlfriend at the time.

He also allegedly told Mr Parkash: "If you are proud of your own race, you marry somebody Indian."

Mr Parkash’s girlfriend, who is half-Thai and half-Singaporean Chinese, recorded the confrontation and the video went viral online.

Tan, who is Singaporean, is also said to have made insensitive remarks about Islam during a lecture in Ngee Ann Poly on July 28, 2017.

He is also accused of providing insensitive answers about religion in response to questions on an online forum between Aug 10, 2020, and Sept 13 the same year.

Tan, who has since been sacked by Ngee Ann Poly for serious misconduct, also faces one charge of possessing 64 obscene films.

Tan, who is represented by Mr Johannes Hadi from Eugene Thuraisingam LLP, is out on $5,000 bail and is set to return to court on June 24.

For wounding racial feelings, he can be jailed for up to three years and fined.

The maximum penalty for committing an act prejudicial to the maintenance of religious harmony carries a three-year jail term and a fine.

If convicted of possessing obscene films, Tan can be fined up to $40,000 and jailed for up to a year.