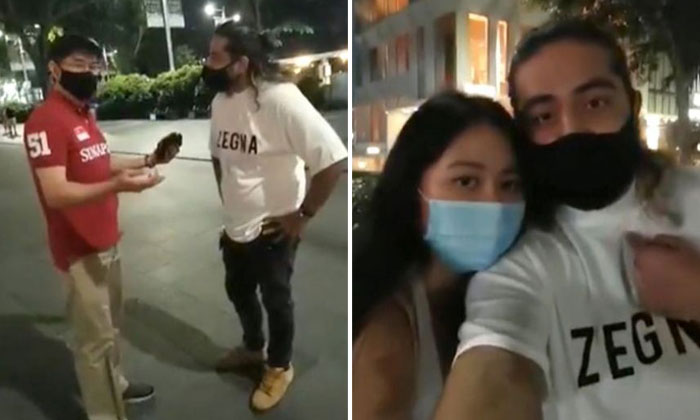 The police are investigating an incident in which a Chinese man was caught on camera making racist remarks to an interracial couple. A video of the incident has been circulating on social media.

Commenting on the video in a Facebook post on Sunday (June 6), Home Affairs and Law Minister K. Shanmugam said that while he does not have the full facts of the story, it seems like more people are finding it acceptable to make "in-your-face" racist statements openly.

Describing the incident as "quite unacceptable" and "very worrying", Mr Shanmugam said that he used to believe that Singapore was moving in the right direction in terms of racial tolerance and harmony, but in the light of recent events, he is "not so sure" any more.

Police said that reports have been lodged about the incident, and that a 60-year-old man is currently assisting with police investigations.

The video of the confrontation, which lasted slightly more than five minutes, was shared by Facebook user Dave Parkash, 23.

In it, a Chinese Singaporean man accused Mr Parkash of "preying on a Chinese girl". The video appears to be filmed by his girlfriend.

The man also added that a Chinese woman should not be with an Indian man.

In the video, Mr Parkash also clarified that he is half-Indian and half-Filipino while his girlfriend is half-Singaporean Chinese and half-Thai.

In his post on Sunday morning, he said: "We both are mixed race but we are proud to be Singaporeans."

He added that he felt "embarrassed, humiliated and hurt" by the way he was being treated by another fellow Singaporean.

Mr Parkash said the man told them they should only date "people of our own race".

"He called himself a racist and even blamed us for being racist just because (we) are from different races," he said.

"Love is love. Love has no race, love has no religion. You and I should be able to love whoever we wanna love. Let's not become like this man in the video."

Mr Parkash's post added: "To this man who may end up watching this, I hope you learn to stop being a racist and let us all live in harmony."

The Straits Times has contacted Mr Parkash for comments.

In a separate Facebook post on Sunday, Senior Minister of State for Communications and Information and for Health Janil Puthucheary condemned the "blatant racism and bigotry" of the man who confronted Mr Parkash.

Such behaviour is "caused by ignorance, intolerance and anger" and is unacceptable, said Dr Janil, who is chairman of OnePeople.sg, the national organisation that promotes interracial and inter-religious understanding.

Aljunied GRC MP Leon Perera also commented on the incident, saying he was glad Mr Parkash drew public attention to the racist abuse he and his partner endured, as incidents like this can shape society's attitudes towards race and other sensitive topics.

"While it is disheartening to know that there are citizens who have not embraced the part of our pledge that reads 'regardless of race, language and religion', the outpouring of support for Mr Parkash and his partner suggests that the stranger in the video speaks for a minority," said Mr Perera.

"If all those who stand for the values of equality, fairness and kindness stand up for what we believe in, that minority can only get smaller."