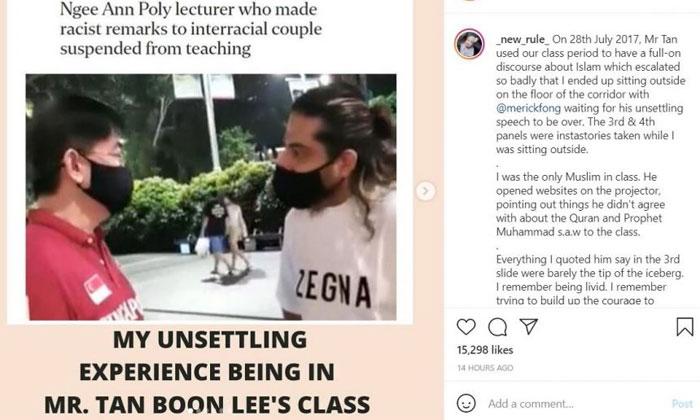 Former students of Ngee Ann Polytechnic (NP) lecturer Tan Boon Lee have accused him of racially and religiously insensitive behaviour in the classroom.

One of them, Ms Nurul Fatimah Iskandar, 22, in an Instagram post on Wednesday (June 9), said Mr Tan had initiated an offensive discussion about Islam during lesson time when she was his student about four years ago.

She told The Straits Times on Thursday: "He opened websites about Islam and explained why he didn't agree with certain Quranic verses. He then singled me out, and tried to start a debate on the topic. It didn't help that I was the only Muslim student in class and I sat in the front row."

When asked about Ms Nurul's allegations, Mr Tan declined to comment "at the moment" but said he remembers her as a former student.

In response to queries from ST, NP said it was aware of the allegations against Mr Tan and deeply regrets Ms Nurul's experience.

It added the polytechnic has a zero tolerance approach on any form of misconduct by members of its community.

"Our staff members are expected to respect the cultural, ethnic and religious differences when interacting with students and other staff members," an NP spokesman said on Thursday night.

Second Minister for Education Maliki Osman also addressed Ms Nurul's Instagram post, saying he was "shocked and disappointed" to hear about Mr Tan's sharing of his "personal and derogatory views on Islam".

"There is no place for any anti-ethnic and anti-religious remarks in our education institutions, and even more so from an educator," Dr Maliki said in a post on Facebook on Thursday night.

He said the Education Ministry and educational institutions here have a zero-tolerance stance towards any behaviour or remark that is intentionally insensitive and derogatory to any race or religion.

"All our educators are expected to uphold the Code of Conduct set out by their institutions, which states clearly that they must uphold secularity and impartiality at all times," he added.

The polytechnic has suspended him from teaching duties and is conducting an internal investigation after a video of the incident surfaced online on Sunday.

In Thursday's statement, NP added that it would not hesitate to take disciplinary actions against Mr Tan, including dismissal if appropriate.

Ms Nurul, who is now an electrical engineering student at the National University of Singapore, said the incident happened in July 2017.

She was a second-year electrical engineering student at the polytechnic at the time.

She said: "I remember being so affected by it that I sat outside the classroom with a friend, waiting for him to finish talking."

She nearly stopped going for his classes after that, but decided not to because it was too close to the final examinations. 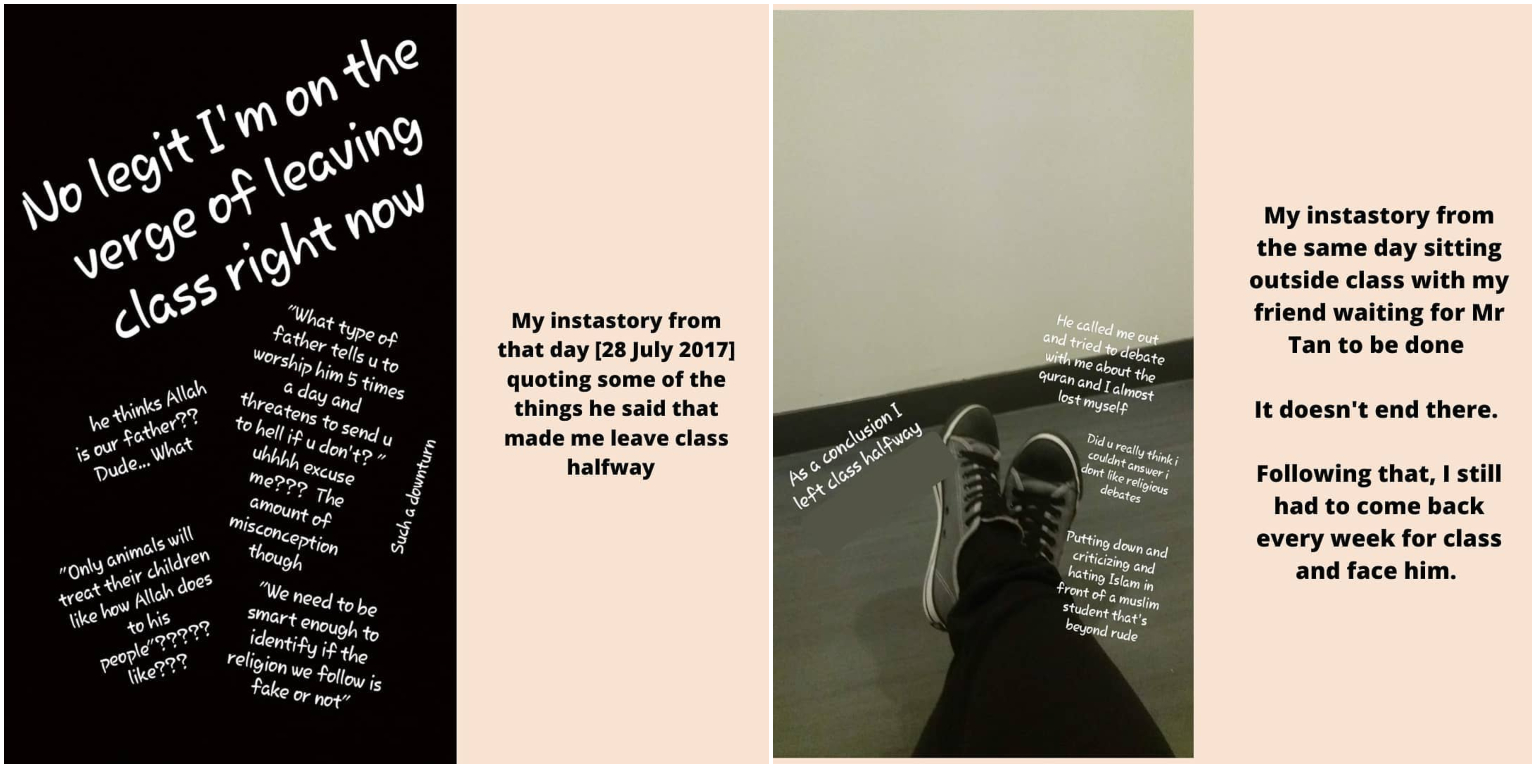 Since she put up the post about the incident on Instagram, Ms Nurul said more accounts about Mr Tan from other students have come to her attention. PHOTOS: NURUL FATIMAH BINTI ISKANDAR/INSTAGRAM

Ms Nurul said the experience in Mr Tan's class was difficult for her.

She said: "I was only 18 then, and was still fresh out of the madrasah... Being singled out like that was very jarring for me."

She said it was tough for her to speak up against her lecturer, as she was afraid that her scholarship would be at stake if things went badly.

"After all, I'm still being graded by the same lecturer so I felt it was wiser not to say anything about it," she said.

"And being the only minority in class, it's very hard for me to speak out, and it is just as difficult for fellow classmates to back me up in case anything goes wrong. Also, I've always grown up with the mindset that I shouldn't cause any trouble," she added.

Ms Nurul finally mustered the courage to send an e-mail to the school about what happened. She never got a response, she said.

Since she put up the post about the incident on Instagram, Ms Nurul said more accounts about Mr Tan from other students have come to her attention.

One user on Instagram alleged that Mr Tan once made disparaging comments about Christianity in class, causing outrage among the students, while another alleged that the lecturer had made her take off her hijab.

"The hijab that I am proud of wearing became something that I felt ashamed of when he was around," the user wrote.

Asked if such incidents were common in school, Ms Nurul said that casual racism does exist, but no one was as "daring" as Mr Tan.

In her Instagram post, Ms Nurul said Mr Tan should not be allowed back in the classroom again because a "racist Islamophobe has no place educating our youth".

Former Ang Mo Kio GRC MP Intan Mokhtar posted on Facebook on Thursday, addressing Mr Tan's racist remarks and educators' role in making classrooms inclusive. "We demonstrate values that our students observe and learn from, and which are likely to rub off and shape their worldviews or actions," said the assistant professor at the Singapore Institute of Technology.

National Institute of Education don Jason Tan said that while it was important for teachers to be able to conduct discussions on difficult issues like race and religion, they must be able to do so with basic respect.

"To be able to conduct these discussions, the first step is for them to confront their own biases and prejudices," he said.

"What happens in classrooms shapes student's values, attitudes and behaviours. Educators have a heavy responsibility thrust upon them."

Associate Professor Tan added that discussions on sensitive topics should be conducted during the appropriate lessons. The discussion involving Ms Nurul, he said, took place during a class where the topic was not on the curriculum.