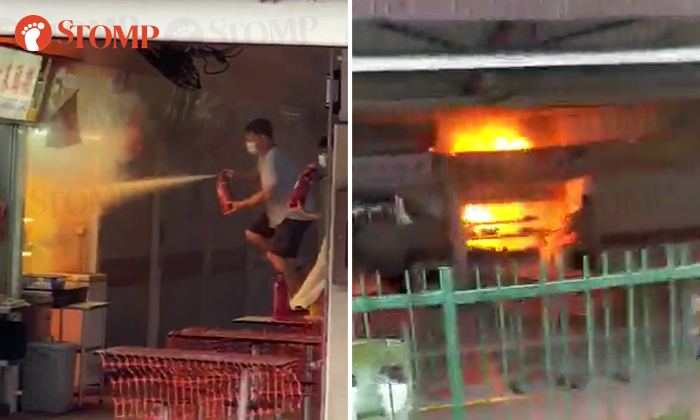 A fire broke out at a nasi lemak stall at Changi Village Hawker Centre on Thursday morning (Apr 30).

Stompers Watson and Roger shared circulated videos showing a food stall up in flames. Men can also be seen putting out the blaze with fire extinguishers.

The Singapore Civil Defence Force (SCDF) told Stomp that it was alerted to a fire at 2 Changi Village Road at around 7.45am.

A spokesman said: "The fire, which involved the contents of a stall, was extinguished by members of the public using about 10 extinguishers prior to the arrival of SCDF."

One person was assessed by paramedics for difficulty in breathing but subsequently refused conveyance to the hospital.

No evacuation was conducted.

Stomper Watson also noted that this is not the first time a fire has occurred at Changi Village Hawker Centre.

In August 2017, a fire broke out at another nasi lemak stall while an employee was preparing chilli sauce. No one was hurt in the incident.