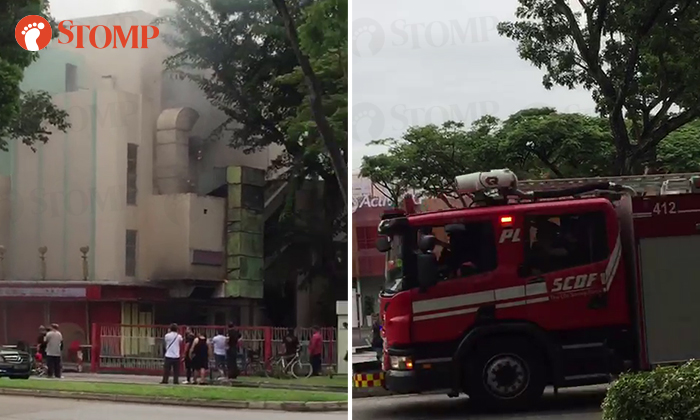 A fire involving a kitchen exhaust duct broke out in a coffee shop at 90 Boon Lay Place at about 4.30pm on Tuesday (Oct 22).

Stomper Chen had just delivered food to a resident at Block 214 Boon Lay Place when he saw the fire.

He contributed a video of the scene and said: "I was coming down from the block when I heard the fire alarm go off.

"I saw a fire engine arriving at the scene and was surprised to see this."

Chen added: "There was nothing going on when I was going to deliver food and then just a few minutes later, I heard the fire alarm. I was just very surprised."

Responding to a Stomp query, the Singapore Civil Defence Force (SCDF) said: "SCDF responded to a fire in a Level 1 coffee shop located at 90 Boon Lay Place at about 4.30pm on Oct 22."

'The fire, which involved a kitchen exhaust duct, was put out by SCDF using one water jet.

"About 20 persons self-evacuated prior to SCDF’s arrival and there were no reported injuries.

The SCDF also shared some ways to prevent such fires:

Cooking should not be left unattended;

The stove, its surrounding area and the opening of the exhaust ducts in each stall are to be free from grease and oil stains. This is to minimise or prevent the fire from spreading quickly in the coffee shop; and

Such kitchen exhaust ducts at eating establishments must be cleaned and maintained at least once a year.