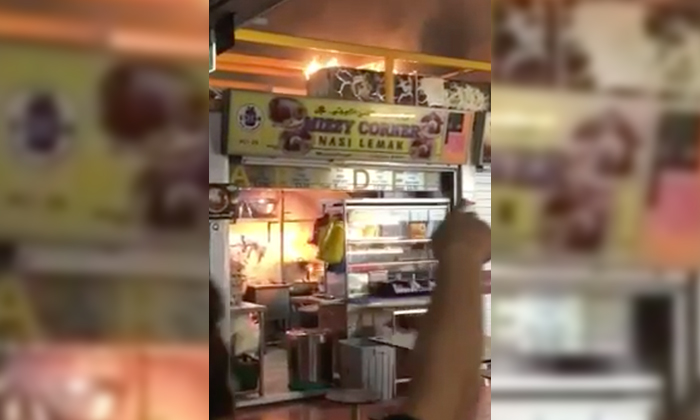 A nasi lemak stall at Changi Village hawker centre caught fire yesterday (Aug 07) at around 5am.

The stall, Mizzy Corner Nasi Lemak, has been operating from Chani Village for the past 20 years, and will be closed for ‘one to two weeks’ for repair works, said the owner’s 26-year-old son, Mr Iskandar Abu Nazir.

He told The Straits Times:

“We want to make sure everything is properly done up before we open again for business.”

The fire apparently broke out when a lone employee was preparing chilli sauce.

When asked about the incident, Mr Iskandar said that the chilli sauce preparation is routinely done, and at a relatively low cooking temperature.

Mr Iskandar told reporters that he had been informed of the fire after it was put out, and the lone employee was unhurt.

However, the fire damaged the stove and other cookware in the stall.

Fortunately, the losses were minimised when many people, including other stall owners, stepped forth to help out.

"We have to try and look at the situation in a positive light. We take it as a lesson learnt, maybe to be more vigilant in future.”

The Singapore Civil Defence Force (SCDF) said that it was alerted to the case at 5.36am.

It dispatched a fire engine to the scene.

The fire involved the contents of a kitchen stove and the exhaust ducting.

It was extinguished by members of the public using a dry-powder extinguisher, before the SCDF’s arrival.

Related Stories
3 injured in fire at Haig Rd block: 5 neighbours broke down door to save kids in burning unit
Photos and videos: We've seen many fires in S'pore -- but nothing like this morning's in Tuas
54-year-old woman dies after fire breaks out in building opposite IMM in Jurong
More About:
fire
Changi Village
nasi lemak