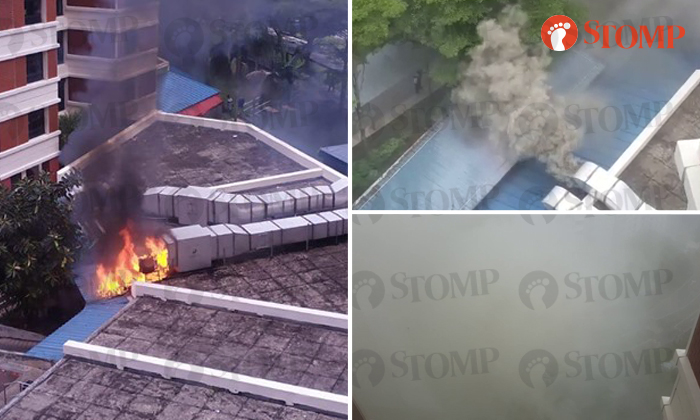 A fire broke out at a coffee shop in Redhill on Wednesday afternoon (June 5) and left neighbouring blocks covered in a curtain of smoke.

In response to queries, the Singapore Civil Defence Force (SCDF) said it was alerted to the incident at Block 75D Redhill Road at 4.04pm.

The fire, which involved the ventilation duct of a coffee shop, was extinguished by the SCDF using a compressed air foam backpack and a hose reel.

Patrons at the coffee shop self-evacuated before firefighters arrived and no injuries were reported.

Stomper Ashley, who lives on the 15th floor of Block 75A, took several videos showing smoke billowing out of the ventilation duct on the roof of the building.

At one point, the camera's visibility was almost completely obscured by smoke.

SCDF officers can also been seen extinguishing the fire.

"The fire engine arrived in less than 10 minutes. Prior to that, a resident used a water pipe that was connected from the nearby carpark and sprayed water onto the fuming duct."

Photos circulating on social media show orange flames at one end of the ventilation duct.