FairPrice attack: Jail and caning for youth who chased victim, slashed him with knife that got lodged in his head 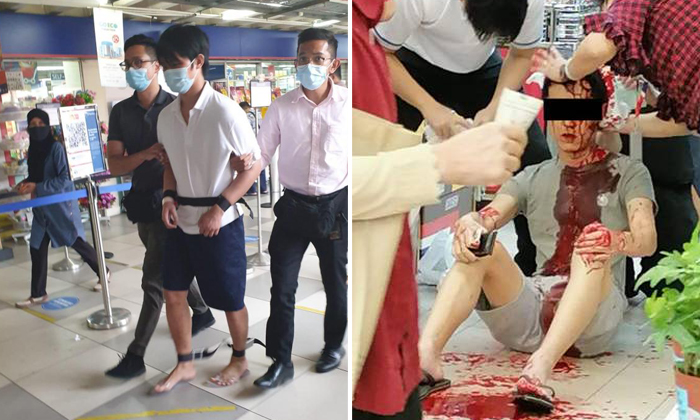 A recalcitrant teenage offender flew into a rage after a man he approached refused to buy him cigarettes, and used a knife to attack his victim at the Boon Lay Place FairPrice outlet last October.

A medical report states that the injuries of Mr Lee, 23, a waiter, will cause "permanent incapacity in terms of disfigurement and scarring".

Teck was sentenced on Tuesday (April 27) to 3½ years' jail with eight strokes of the cane after he pleaded guilty to one count each of using a knife to cause grievous hurt to Mr Lee and being in possession of the weapon in a public place.

The court heard that Teck was 13 years old when his parents filed a "beyond parental control" complaint against him, as they were unable to discipline him.

He was then sent to Boys' Town, a charity with residential care for vulnerable children and youth.

The teenager was out on leave during his stay there when he committed robbery with hurt and was sentenced to reformative training on April 25, 2018.

This means he was detained in another centre and made to follow a strict regimen that included foot drills as well as counselling.

He was released from a reformative training centre in February last year, only to commit the knife attack at the supermarket just eight months later.

Shortly before the incident on Oct 7 last year, Teck slipped a knife into the top of his bermuda shorts and left his home at around noon that day.

Deputy Public Prosecutor Janice See said that Teck had armed himself with a weapon so that he could use it "as a means of self-defence".

Teck was at Boon Lay Place when he approached Mr Lee, who was then standing in a queue to enter the FairPrice outlet.

He asked Mr Lee to buy him cigarettes and became angry when the man repeatedly declined to do so.

The teenager felt that Mr Lee was being "rude and disrespectful", and decided to hurt him with the knife.

Mr Lee was scanning the QR code to enter the supermarket when Teck whipped out the knife, lunged at him and yelled: "You don't want to buy, right?"

The teenager then slashed Mr Lee, aiming for the latter's face, as he felt that facial injuries would make it more difficult for the waiter to defend himself.

DPP See said: "The victim tried ducking to escape the attacks and started shouting that he was sorry, but the accused pulled the victim's upper body downwards and swung the knife one more time in the direction of the victim's face.

"The victim managed to escape the temperature screening area and ran into the (supermarket), leaving a trail of blood. The accused gave chase, caught up with the victim who was limping by this time, and swung the knife once more towards the victim."

This time, Teck swung the weapon towards Mr Lee's head and it became momentarily lodged there before the attacker pulled it off.

Teck continued chasing Mr Lee inside the supermarket and stopped only when he realised that his actions had attracted public attention.

He ran out of the supermarket and got rid of the knife. After that, he washed Mr Lee's blood off his hands and took a taxi to Yishun.

The police were alerted and officers arrested Teck at around 11pm that day.

Meanwhile, Mr Lee was taken to Ng Teng Fong General Hospital and was later given 40 days of hospitalisation leave. He has since resumed work.

The Straits Times understands that the supermarket was closed for several hours after the attack.

A FairPrice spokesman said in an earlier statement: "Our staff rendered immediate assistance and ensured that the safety of our shoppers was not compromised... Our store operations remain unaffected."

An offender convicted of voluntarily causing grievous hurt with a dangerous weapon can either be jailed for life or jailed for up to 15 years, fined and caned.