An 18-year-old man has been arrested in relation to the case.

A 23-year-old man was taken to hospital after suffering head and facial injuries in a knife attack outside FairPrice supermarket at Boon Lay Shopping Centre on Wednesday (Oct 7).

The police were alerted to a case of voluntarily causing grievous hurt by dangerous weapon at 221 Boon Lay Place at 12.40pm, they told Stomp in response to queries.

A police spokesman said: "A 23-year-old man was attacked by another man with a knife.

"The 23-year-old man suffered injuries to his face and head and was conscious when conveyed to Ng Teng Fong General Hospital."

Stomper PK said he was shopping in the supermarket he witnessed the incident.

He recounted: "Two men were fighting and one of them was later seen returning with a chopper. He shouted in Hokkien and suddenly started attacking the other man.

"Everyone ran away and the attacker fled, while the injured man was lying on the floor. FairPrice staff quickly went to his aid while the police were called."

According to PK, supermarket staff told everyone to "exit immediately".

He added: "I wanted to help because I'm an off-duty enforcer but there was a weapon involved, so the first thing I did was to get out and dial 999."

PK shared a video showing the scene and spots of blood on the ground, both inside and outside FairPrice.

He also submitted photos of a man sitting in a pool of blood with his face, hand and clothes bloodied while paramedics and supermarket staff attended to him.

They can be seen holding bandages to the man's head, face and arm to staunch the bleeding.

The supermarket was also seen cordoned off by the police. 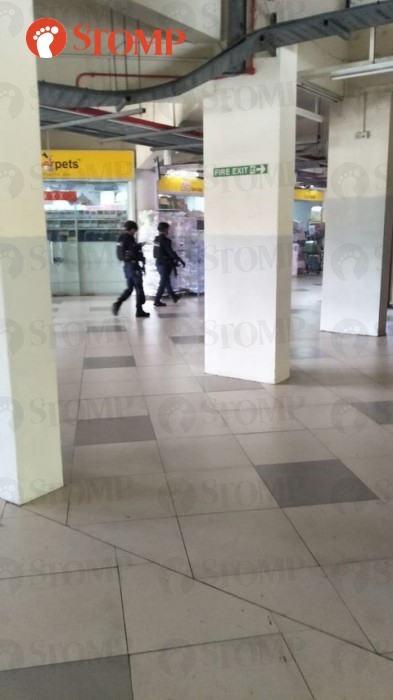 PK said: "I saw police looking for the attacker."

The Singapore Civil Defence Force (SCDF) told Stomp it received a call for assistance at Block 221 Boon Lay Place at around 12.40pm and took one person to Ng Teng Fong General Hospital.

Responding to a Stomp query, a FairPrice spokesman said it was aware of the incident that took place outside its store.

The spokesman added: "Our staff rendered immediate assistance and ensured that the safety of our shoppers was not compromised."

The spokesman also said that store operations remain unaffected, but is unable to comment further as police investigations are ongoing.

Related Stories
Man arrested after slicing his own arm in Choa Chu Kang, 2 taken to hospital
Man who assaulted victim at Rivervale Crescent and left him with facial fracture charged in court
3 arrested for attack on youth who was ambushed while going to meet GF's ex-lover
More About:
slashing
stabbing
injured
supermarket
arrest
weapon
violent