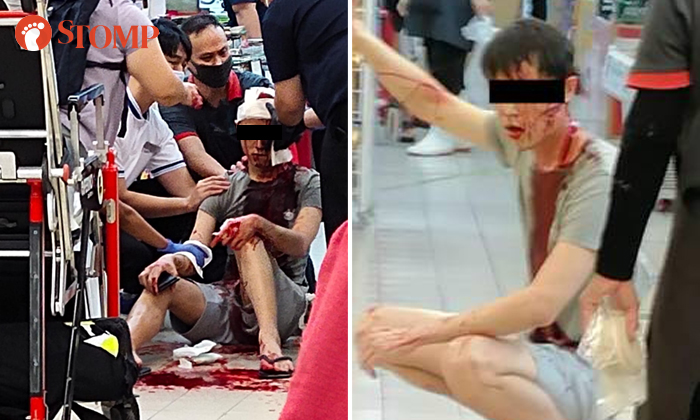 A 18-year-old youth who allegedly attacked a man with a knife outside a supermarket in Boon Lay will be charged in court with voluntarily causing grievous hurt by dangerous weapon on Friday (Oct 9), said the police.

The attack occurred outside FairPrice supermarket at Boon Lay Shopping Centre on Wednesday, at around 12.40pm.

A 23-year-old man suffered injuries to his face and head, and was conscious when conveyed to Ng Teng Fong General Hospital.

Stomper PK, who sent photos and a video of the scene, recounted how he saw two men fighting.

He said: "One of them was later seen returning with a chopper. He shouted in Hokkien and suddenly started attacking the other man.

"Everyone ran away and the attacker fled, while the injured man was lying on the floor. FairPrice staff quickly went to his aid while the police were called."

The suspect was arrested on the same day, after the police established his identity through ground enquiries and with the aid of CCTV footage.

"The police will work with the prosecution to seek a court order for the man to be remanded at the Institute of Mental Health for psychiatric evaluation," said the police on Thursday.

Anyone convicted for the offence of voluntarily causing grievous hurt by dangerous weapon can be jailed for life, or up to 15 years and fined or caned.