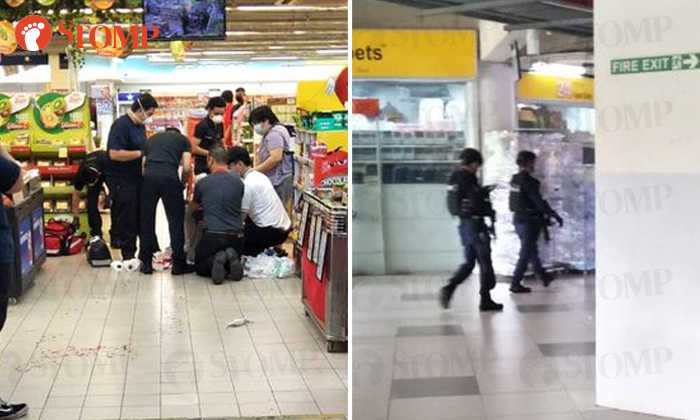 A teenager was charged in a district court on Friday (Oct 9) over his alleged involvement in a knife attack at the Boon Lay Shopping Centre FairPrice outlet earlier this week.

James Teck Jing You, 18, who appeared in court via video link, is accused of one count of voluntarily causing grievous hurt with a weapon.

The attack, which took place at the supermarket at Block 221 Boon Lay Place at around 12.40pm on Wednesday, left Mr Lee Jing Wen, 23, with injuries to his face.

In a statement on Thursday, police said: "Through ground inquiries and with the aid of CCTV (closed-circuit television) footage, officers from Jurong Police Division established the identity of the suspect and arrested him on the same day."

Mr Lee was given medical assistance at the scene before an ambulance rushed him to Ng Teng Fong General Hospital.

A Boon Lay resident in his 40s had earlier said that he was shopping at the supermarket on Wednesday when he heard "loud shouting" nearby.

The man, who declined to be named, added that he then spotted a young man covered in blood.

The Straits Times understands that the supermarket was closed for several hours after the incident.

A FairPrice spokesman said in an earlier statement: "Our staff rendered immediate assistance and ensured that the safety of our shoppers was not compromised.

Teck will be remanded at the Institute of Mental Health for psychiatric observation. The case has been adjourned to Oct 23.

An offender convicted of voluntarily causing grievous hurt with a dangerous weapon can either be jailed for life or jailed for up to 15 years and caned.