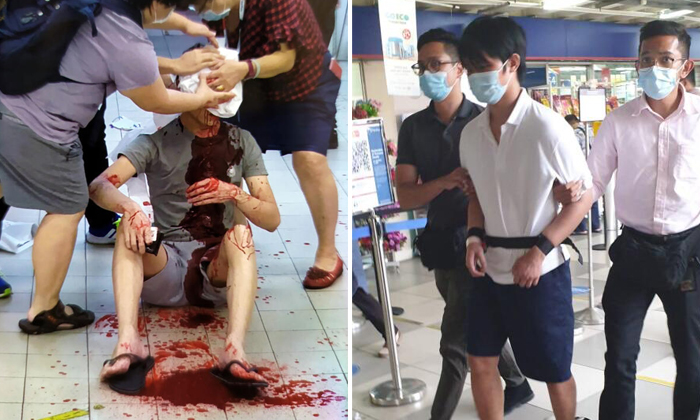 A 23-year-old man who was injured in a knife attack at Boon Lay Shopping Centre on Wednesday (Oct 7) did not know his assailant.

The attack, which occurred outside FairPrice supermarket at Block 221 Boon Lay Place at around 12.40pm, left Mr Lee Jing Wen with head and facial injuries.

James Teck Jing You, 18, was charged with one count of voluntarily causing grievous hurt with a weapon on Friday.

According to Lianhe Wanbao, the two men did not know each other. However, they were seen in a dispute at FairPrice's entrance prior to the attack.

Teck had apparently asked Mr Lee, who was about to enter the supermarket, to buy cigarettes on his behalf, reported Wanbao.

Mr Lee declined and went to the supermarket entrance to have his temperature taken, only to be attacked from behind.

Mr Chen, 29, said that he saw the suspect suddenly brandishing a knife about six inches (around 15cm) long and slashing the victim's head, causing the latter to scream.

"The victim was bleeding profusely. He covered his head and looked to be in deep pain," recounted Mr Chen, who works at the shopping centre.

"He ran into the supermarket to ask for help, and the assailant chased him the whole way

"The man fell to the ground after screaming repeatedly.

"The assailant turned and fled.

"There was a lot of blood on the floor."

Mr Lee was given medical assistance at the scene before an ambulance rushed him to Ng Teng Fong General Hospital.

Teck was arrested on the same day. He was brought back to the crime scene on Thursday and will be remanded at the Institute of Mental Health for psychiatric observation.

The case has been adjourned to Oct 23.