Son kills father with headlock and chokehold after heated argument 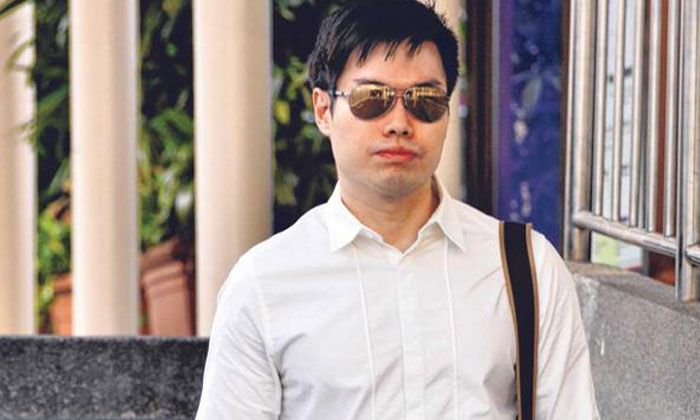 A 67-year-old man who died after an incident following a quarrel with his son had likely sustained his injuries over a "considerable amount of time" and suffered "a significant amount of force" to his neck.

His son Mark Tan Peng Liat, 30, who is a businessman, has been charged with culpable homicide not amounting to murder for his death. Tan appeared in court on Monday (Oct 10) for the third day of his trial.

The father suffered 31 external injuries in the incident, an autopsy found, and these were likely inflicted over a "considerable amount of time". He had bruises and abrasions, and among his internal injuries was a fracture of the thyroid cartilage. All these were believed to be fresh injuries.

A polo tee with the older man's blood was also found in the son's laundry basket in his bedroom, the court heard.

Tan was said to have put his father, Mr Tan Kok Keng, in a headlock and chokehold after a quarrel at their West Coast Rise home on Feb 10 last year. The senior Mr Tan was pronounced dead an hour after he was taken to the National University Hospital.

Taking the stand on Monday were Assistant Superintendent Tan Boon Kok, senior investigation officer for the case, and Dr Lee Chin Thye, a forensic pathologist with the Health Sciences Authority who did the victim's autopsy.

Injuries, which were on both sides of Mr Tan Kok Keng's neck, "indicate that a significant amount of force was applied" to it, said Dr Lee.

"Many of these injuries are over vulnerable areas, exposed areas, prominent areas, where injuries can be sustained when one is struggling - either knocking against objects, knocking against parts of the wall, or on the floor," he said.

They were also scattered over various parts of the body from head to toe and were unlikely to have been suffered over a short period of time.

As the list of injuries were read, Mark Tan Peng Liat stared straight ahead with a blank expression, closing his eyes halfway through.

ASP Tan said on Monday that blood stains were also found in the toilet of the master bedroom on the day of the incident. This was the bedroom where the senior Mr Tan was later found motionless.

Mark Tan Peng Liat's bermudas had both his blood and his father's as well. The top was found on the scene, inside a laundry basket inside the accused's bedroom, said ASP Tan.

The court heard that a psychiatric evaluation done by Dr Jaydip Sarkar also showed that Mark Tan Peng Liat does not suffer from any mental disorder or intellectual disability. He was not of unsound mind, and did not have any clinical disorder.

The Straits Times understands that accused's position is that the elder Mr Tan's death was accidental, and that his son had been trying to restrain his father who had become violent. The late Mr Tan also suffered from hypertensive heart disease, which was discovered only during the autopsy.

Dr Lee said that while the main cause of death is believed to be a "manual compression of the neck", heart disease was likely a contributory factor that hastened his death.

In July, Mark Tan Peng Liat's paternal aunt, Madam Tan Hoon Choo, 72, recounted in court how the elder Mr Tan's maid had gone to her house "hysterical" and crying. Ms Sumarti Dwi Ambarwati was asking for help around 5.40pm on the day of the incident.

Ms Sumarti has since returned to Indonesia and attempts were made to trace her via Interpol to no avail.

Mark Tan Peng Liat had appeared pale and looked bewildered and lost outside the house when Madam Tan hurried over on the day of the incident. She added that both men had a very good relationship and the elder Mr Tan, who had a black belt in taekwon-do, had been proud of his son.

If found guilty of culpable homicide, Mark Tan Peng Liat could be jailed for up to 10 years, fined or caned, or receive any combined punishment.

Related Stories
West Coast murder: Mum grieves,"What do you expect me to do, kill my son?"
Son who killed father at West Coast flat says he 'did not know a chokehold would kill him'
Son, 29, allegedly killed 67-year-old father by strangling him in heated argument
KL triple family death: Father was violent and family looked 'pitiful', say neighbours
Man who stabbed lover to death after victim avoided calls and said he was 'not gay' gets 12 years' jail
VivoCity popiah seller who was stabbed by elderly man smitten with her loses kidney
More About:
murder
court
courtroom
violent
abuse
death
dead
west coast murder