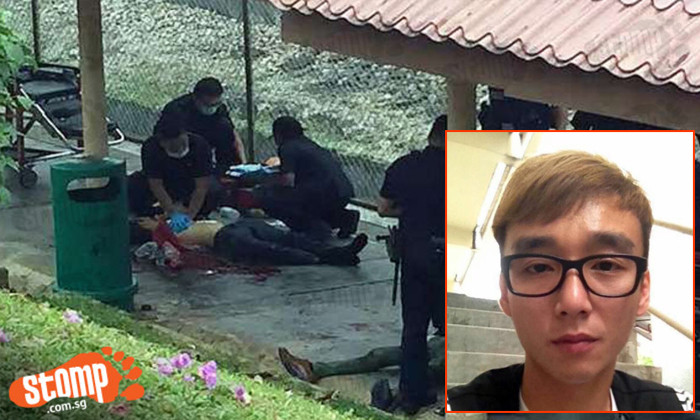 A hairstylist decided to kill his lover of eight years after the latter avoided his calls and told him he was "not gay" when his parents found out about their same-sex relationship and expressed their disapproval.

Tan Chee Yeow, 40, was on Monday (Sept 26) sentenced to 12 years' jail after he pleaded guilty to a charge of culpable homicide.

He admitted stabbing to death Mr Tan Chin Siong, 48, an assistant vice-president at a local bank, at a walkway near Ang Mo Kio MRT station at about 8am on Sept 4 last year.

Both men, who are Malaysians, met in Johor Baru in 2007 and started a romantic relationship, the High Court heard on Monday. That year, the accused moved to Singapore after Mr Tan told him to do so.

However, the relationship went downhill about three years before the incident.

The accused wanted to be publicly recognised as Mr Tan's partner, but Mr Tan wanted to keep their relationship low-profile and kept it from his parents. The accused, who has a drinking habit, had also threatened to commit suicide several times.

Things came to a head on Aug 28 last year - Mr Tan's birthday - when the accused threw a tantrum and nagged at his lover for reneging on his promise to introduce him as his partner to his family members.

Later, Mr Tan told the accused over the phone that he was not gay and that he wanted to get married and have children. He also accompanied the accused to see a psychiatrist, who told Mr Tan to delay his intended break-up while the accused was on medication to stabilise his emotions.

On the morning of Sept 4, the accused headed for Mr Tan's home to look for him, bringing along a knife he had bought a day earlier.

Sensing that there was little chance of a reconciliation, the accused took out the knife and stabbed his lover twice in the chest and once in the back.

A passer-by - who remains unidentified - struggled with the accused, kicked the knife into a drain and scolded him before walking off.

A few other passers-by performed cardiopulmonary resuscitation on Mr Tan before paramedics arrived. Mr Tan was pronounced dead in hospital at about 9.15am.

The accused, who was wailing about having killed someone, was arrested at the scene.

On Monday, Deputy Public Prosecutor Mohamed Faizal sought a jail term of 12 to 14 years. He argued that the accused was not acting on impulse but had made a conscious and deliberate decision to kill his lover.

Lawyer Josephus Tan, acting for the accused under the Criminal Legal Aid Scheme, argued for not more than 12 years. The lawyer told the court that the case was about "betrayed love". He said the accused wanted to be recognised as Mr Tan's life partner but Mr Tan never lived up to his promise.

The accused also wrote a letter in Chinese, saying he was remorseful and seeking forgiveness from Mr Tan's family. "I really loved him. This is the regret of my life and eternal pain," he wrote.