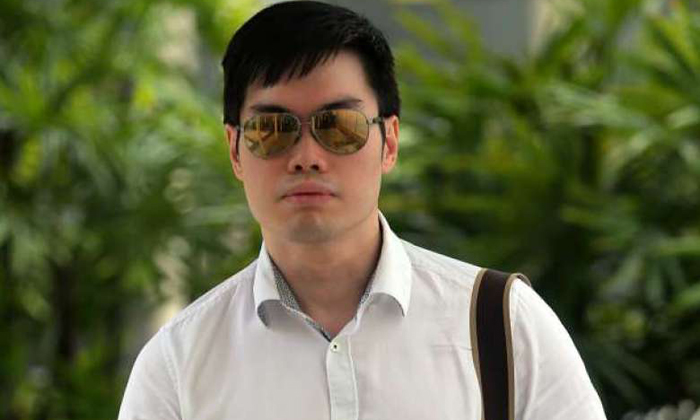 A businessman who is on trial for the manslaughter of his father on Thursday (Oct 13) maintained that his father was physically fitter than him and had attacked him first.

Mark Tan Peng Liat, 30, also insisted that the headlock and chokehold he placed on Mr Tan Kok Keng, 67, was neither dangerous nor likely to result in death.

Tan reiterated that had only been trying to subdue his father, who had a bad temper, from assaulting him.

He was said to have put his father in a headlock and chokehold after a quarrel at their West Coast Rise home on Feb 10 last year. The senior Mr Tan was pronounced dead an hour after he was taken to the National University Hospital.

Tan was first charged with his father's murder, but it was later reduced to culpable homicide not amounting to murder.

Tan claims that he did not know his actions were likely to cause his father's death.

On the stand for the second consecutive day on Thursday (Oct 13), he disagreed with Deputy Public Prosecutor (DPP) Kumaresan Gohubalan's suggestion that his father had not actually posed a serious threat to him.

His father was found with 31 injuries on his body and died from a "manual compression of the neck". But Tan had only seven minor injuries - all bruises and abrasions - the DPP noted.

Tan also denied intentionally striking his father's neck, or punching or kicking him.

However, he agreed that he had to use "significant force" in order to place a headlock and a chokehold on his father, to successfully restrain and subdue him.

DPP Kumaresan told Tan: "Your intention was, at the very least, to render him unconscious."

Tan replied: "No. I didn't know what would've been the best way to restrain him, but to make someone unconscious sounds dangerous."

The DPP said: "You wanted to hold on to him for as long as it would take to be subdued, and by rendering him unconscious."

Tan replied: "No, until he stopped being violent and struggling to attack me; not until he became unconscious."

"You knew a chokehold would result in his death," added the DPP.

But Tan said: "No, most definitely not."

He also disagreed with DPP Kumaresan's assertion that by the time he tried to perform cardio-pulmonary resuscitation, he knew his father was already dead.

If found guilty of manslaughter, Tan faces up to 10 years' jail, a fine, caning, or any combined punishment.

The trial will resume at a later date.