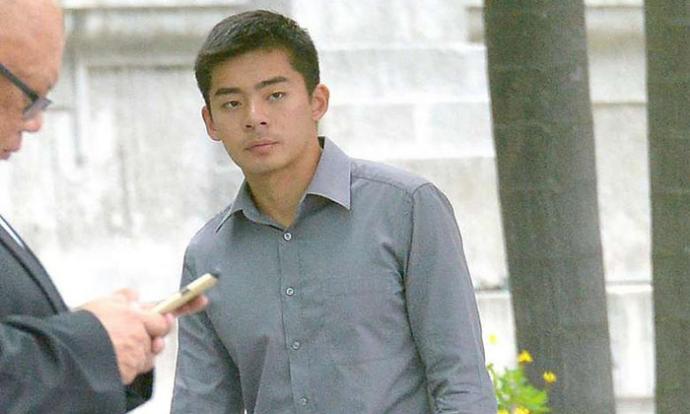 A full-time national serviceman who threatened to circulate his army mate's girlfriend's upskirt video if she did not send him her nude photo within an hour was sentenced to four months' jail on Friday (Nov 11).

Dominique Tiang Zhang Yao, 22, was given four weeks' jail for using his mobile phone to take three photographs and record six video clips of a 21-year-old woman in a hotel room; and one week's jail on each of two counts of unauthorised access to a computer program.

The four-week and one of the one-week sentences will run consecutively with the four months, which means Tiang will serve four months and five weeks. He has deferred sentence until next Friday (Nov 18).

He had pleaded guilty on Sept 30 to four of eight charges. The court had called for a probation report which had recommended him probation.

But the prosecution wanted him jailed given the serious offences Tiang has committed between August 2014 and October 2015.

Deputy Public Prosecutor Nicholas Lai said the probation report stated that Tiang's risk of sexual recidivism was moderate to high. He had also confessed to stealing sweets from convenience stores every three months, and had been taking upskirt videos at Temasek Polytechnic, MRT stations and shopping malls three times a week since 2012 without getting caught.

On Oct 11, 2015 Tiang was going back to Pasir Ris Camp when he spotted the girlfriend of his mate walking past him. He followed the 19-year-old into Pasir Ris MRT station and took an upskirt video of her without her knowledge.

He created a fake Instagram account, searched for her account through his army mate's photographs and sent her the upskirt video. He threatened to leak her video if she did not send him a nude photo of herself . Alarmed and worried, the girl reported to the police, who arrested him three days later.

His mobile phone was found to contain three photographs and six videos of a naked woman in a bathtub of a hotel toilet.

The court heard that he had placed his cellphone behind the curtains of the toilet's glass panel which had been wound down.

Earlier on Aug 22, 2014, Tiang, then an intern, was in the pantry of Proteo Building at Biopolis Drive when he found a Citibank SMRT Platinum Visa credit card belonging to New Zealand national Rebecca Guomin Hu, 35. He used the card to buy US$100 (S$128) worth of online gaming funds on each of four occasions.

Tiang's lawyer Kalidass Murugaiyan had urged the court to place his client on probation saying his client had shown great promise and potential to reform in life, if given a chance.

District Judge Kessler Soh said he hoped Tiang realises that he had committed "serious offences'' with severe consequences for the victims.

Given his good prospects of rehabilitation, the judge said he would be imposing sentences of a lower range than what was usually imposed for such offences.