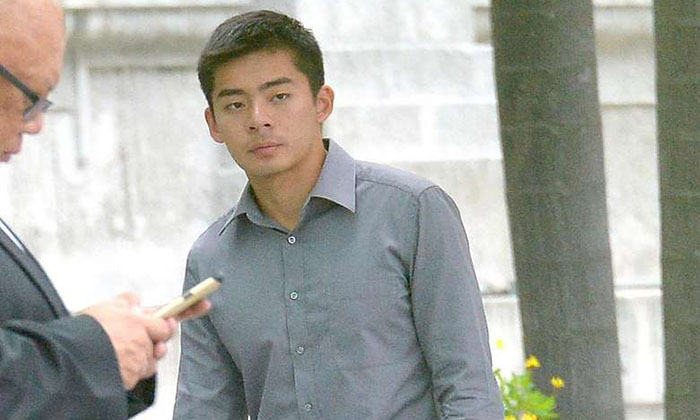 He was waiting for a shuttle bus to his camp when he spotted an army mate's girlfriend walking past him on Oct 11, 2015.

Dominique Tiang Zhang Yao decided to follow the 19-year-old into Pasir Ris MRT station and took an upskirt video of her without her knowledge.

Shortly after that, the 22-year-old created a fake Instagram account and sent the video to the girl through Instagram's direct messaging function. He threatened to upload her upskirt video online if she did not send him a nude photograph of herself within an hour.

Alarmed and worried that the video would be leaked out to the public, the victim lodged a police report that evening.

On Friday (Sept 30), Tiang pleaded guilty to criminal intimidation, insulting the modesty of another woman and two charges of unauthorised access to a computer program.

After his arrest, police found three photographs and six videos of a naked woman in a bathtub of a toilet on his mobile phone.

Investigations later showed that sometime in April 2015, the 21-year-old victim, who was Tiang's friend, had held her birthday celebration in a hotel room. Tiang was among those invited and had stayed for the night.

The next morning, the victim wanted to take a bath and Tiang helped her to wind down the curtains in the open concept toilet. After helping her, he pretended to go back to sleep.

When he was assured that the victim had started to take a bath, he used his mobile phone to take photos and a video of her.

In another case, Tiang was an intern at Proteo Building at Biopolis Drive on Aug 22, 2014, when he found New Zealander Rebecca Guomin Hu's credit card in the pantry. He used the card to buy online gaming funds worth US$100 (S$128.20) each time on four occasions.

Tiang's lawyer Kalidass Murugaiyan, however, asked the court to consider calling for a probation report as the young man has a lot of potential.

Counsel said his client was serving the commandos at the time but was dropped out after the incident. He applied and has been considered for the airforce, but the application has been put on hold because of the case.

Mr Kalidass said his client has strong family support and has taken steps to reform himself. He has also gone for counselling sessions to address his problem.

District Judge Kessler Soh told Tiang that he had committed a number of serious offences but in view of his age, he was calling for a probation report. Tiang cried in the dock when he heard this.

Tiang will be back in court on Nov 2.