Four S'porean ISIS supporters dealt with under ISA: Couple had planned to move to Syria with kids 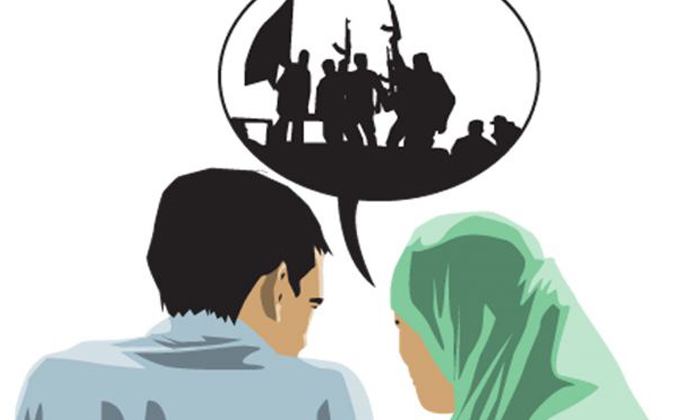 Four Singaporeans, including a married couple, were dealt with under the Internal Security Act this month for being involved in terrorism-related activities.

Two years later, the 33-year-old waste truck driver found online materials by US-born Al-Qaeda leader, the late Anwar al-Awlaki. Omar started supporting the Islamic State in Iraq and Syria (ISIS) in 2014 and was prepared to die a "martyr" by becoming one of its fighters.

He was preparing to go to Syria with his wife and their children when he was caught.

To prepare for their trip to the Middle East, he memorised a pledge of allegiance which he intended to take to ISIS leader Abu Bakr al-Baghdadi.

Mohamed Omar Mahadi, 33, listens to Batam-based religious radio station, Radio Hang. He feels it is his religious duty to become one of the Islamic State in Iraq and Syria's (ISIS) fighters. He memorises the terrorist group's pledge of allegiance and intends to travel to Syria to join it. (Photo: The New Paper)

Omar thought he and his wife, Dian Faezah Ismail, 34, would have to carry out any assignments the terrorist group had for them once he had taken the pledge.

Omar was given a two-year Order of Detention (OD) from this month.

Dian, a fellow ISIS supporter, was given a two-year Restriction Order (RO) from this month. This means the housewife cannot move homes, change jobs or travel out of Singapore without permission from the Internal Security Department Director.

She also cannot issue public statements, address public meetings and be a member of any organisation without the director's approval.

Dian had helped Omar in his plans to relocate their family to Syria. However, according to the Ministry of Home Affairs (MHA), she has moderated her views and will be undergoing religious counselling.

The MHA also said there is no evidence to show that the couple's children have been radicalised.

The MHA said: "He eventually became convinced that ISIS militants were fighting for Islam, and that their beheading of 'enemies' was religiously permissible.

"Rosli was prepared to die for the ISIS cause as he thought it would bring him martyrdom status."

He was keen to travel to Syria to fight for the terrorist group and had looked up information on travel routes there.

He also actively shared radical online content via his social media accounts to motivate others to support ISIS and engage in armed jihad.

Rosli was stopped last month when he returned to Singapore from Batam after visiting his wife and children on the Indonesian island.

He was later arrested under the ISA and was given a two-year OD this month.

The MHA said that, during his arrest, he still harboured the intent to take part in armed violence in Syria.

The 26-year-old building technician later aspired to fight for the terrorist group and was prepared to die in battle. He is related to Omar and Dian by marriage.

The MHA said: "Reiney intended to bring his family with him to Syria and had thought of starting to save money for the trip. He had also checked online for travel routes to Syria."

However, he changed his mind when a close relative intervened.

The relative told Reiney that the fighting in Syria did not concern him and that he would be placing his family in harm's way.

Reiney was given a two-year RO this month and will undergo religious counselling.

Omar's wife, housewife Dian Faezah Ismail, 34, supports her husband's plans to join ISIS and take up arms in Syria. An ISIS supporter, she believes the group's violent actions are legitimate. She helps him with his plans to relocate their family to Syria.

Other S'poreans who have been caught

He has been detained under the Internal Security Act (ISA) for two years.

He is accused of using online platforms to propagate and spread his radical messages, which include glorifying the Islamic State in Iraq and Syria (ISIS) and their violent actions.

Zulfikar is also accused of exhorting Muslims to take up arms in places like the Middle East, Palestinian territories, Myanmar and the Philippines.

At least two other Singaporeans were radicalised as a result including Mohamed Saiddhin Abdullah, 33.

Saiddhin, 33, a businessman, was issued with a Restriction Order (RO) for two years from last month.

He befriended Zulfikar on Facebook and identified him as the one who had influenced him to support ISIS.

He re-posted Zulfikar's posts on ISIS and photographed himself adopting the common pose of ISIS fighters while standing in front of an ISIS flag.

The 27-year-old was re-detained for two years from April. He had earlier been detained under the ISA from 2010 to 2012.

Even though he initially made some progress in reintegration, he was recently influenced by radical ideology and wanted to join ISIS.

This 17-year-old boy was issued with an RO for two years from last month.

He became radicalised after viewing pro-ISIS videos online and sought out like-minded individuals on the Internet.

Basheer, 37, was released in February on a Suspension Direction. This means he may be detained again if he does not meet the conditions of his release.

He was released after the authorities assessed that he was no longer a security threat who required preventive detention.