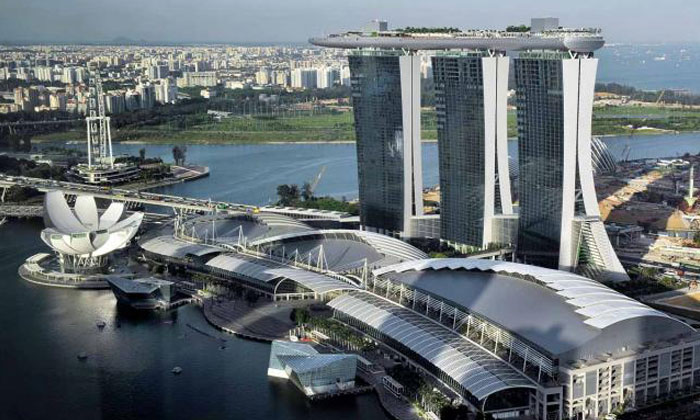 News of an Indonesian militant plot to fire a rocket to hit Singapore's Marina Bay may seem like a far-fetched idea to some, but terror analysts say it is a "real possibility" and a threat not to be taken lightly.

And if the leader of the little- known terror group, Katibah GR or "Cell GR", from the holiday island of Batam had succeeded in doing so, it would have been a "big achievement" for supporters of the Islamic State in Iraq and Syria (ISIS) in the region.

"Singapore is well known for being very careful and has very tight security. Terrorists hope to break it down.

"It would be an important win, like the attack on the World Trade Center in the US."

The group, led by 31-year-old factory worker Gigih Rahmat Dewa, comprises more than a dozen people and is "fairly new", having been set up around 2014, Mr Al Chaidar said.

Analysts told The Straits Times that the group is linked to radical ideologue Aman Abdurrahman, who police said had a hand in plotting the Jan 14 terrorist attack in Jakarta, which killed eight people.

Aman was long suspected to have a role in the attack on the capital which was carried out by four militants under Indonesia's Jemaah Anshar Khilafah terror network.

Bahrun officially pledged himself to ISIS in 2014 and travelled to Syria last year after becoming a disciple of master recruiter Aman.

Indonesia's security forces are focusing on domestic terror networks and smaller militant cells trying to take over the mantle from Jemaah Islamiah (JI).

Analysts noted that some of the group members rounded up are young - with the youngest being 19 - so they are "definitely not" recruits from JI.

They added that they were "surprised" to learn that the Batam cell was plotting to attack Singapore as its interest was really to fight alongside ISIS in Syria.

However, Mr Al Chaidar said rumours have swirled that Gigih's group planned to hijack a boat and launch a homemade missile towards the Marina Bay area from sea, he said.

"They are not militants talking big.

"They do have the expertise since they have had industrial and technical jobs before. It's not impossible," he said.

Indonesian police in the Riau Islands said a week later that the bomb threat no longer posed any immediate danger and lowered terror alert levels.

That was likely how the police uncovered the Batam cell, Mr Al Chaidar said.

Mr Taufik Andrie, a terrorism expert from the Institute for International Peace Building, told The Straits Times that Batam is a "hub" or gathering spot for Indonesian militants wanting to join the battle in Syria.

Gigih's cell acts as a "connector", helping them to make the trip illegally through Malaysia and Singapore.

He said Singapore is being targeted as it is considered to be "part of a global coalition against ISIS, even if the Singapore Government did not send people to directly fight in Syria".

He said "it has been a while" since he last heard about plots to attack Singapore.

The last time was in 2002, when the Singapore authorities revealed that Yishun MRT station had been the target of a bomb plot by a terrorist cell.

Mr Taufik said he has not heard of terrorists wanting to launch an attack by firing a rocket, whether to Singapore or anywhere in Indonesia.

He said it is unlikely that a rocket could "fly across" from the Batam mainland to Singapore - whether hand-held or mounted on a vehicle - due to the distance of some 25km.

But he warned that an attack from sea is "highly possible".

"We must remain vigilant and alert. We cannot underestimate them.

"After all, they are extremists. If they really want to do it, they will put in the effort," he said.

"Every terrorist threat is important," he added.

Analysts said the authorities in Indonesia, Malaysia and Singapore must step up joint sea patrols in the common waterways, as well as secure illegal ports in remote areas such as Aceh.

Regular spot checks must also be carried out on boats.

Indonesia has been the target of several terror threats in recent months, including lately from the East Indonesian Mujahidin extremist group.