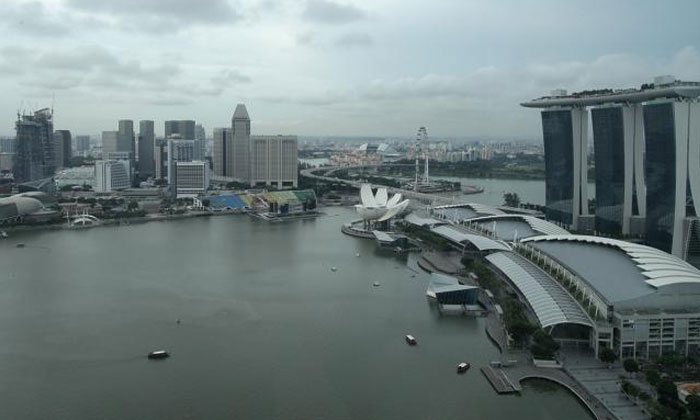 Radicals who target Singapore are serious about planning an attack, and will look for different ways to do so, Home Affairs and Law Minister K. Shanmugam said.

And the authorities have zero tolerance for those who harbour such thoughts, and constantly work with partners in neighbouring countries to detect and deter such threats.

"What you saw being foiled in Batam, this is the nature of things to come," he said yesterday.

He was speaking to reporters at a constituency event a day after Indonesia arrested six members of a terror cell in Batam, whose leader had been planning a rocket attack on Marina Bay together with ISIS militant Bahrun Naim.

Mr Shanmugam said that co-operation between Indonesia, Malaysia and Singapore to combat terrorism was good and had to continue, and he will travel to Bali this week for a regional security conference.

Yesterday, security in Batam - a 45-minute ferry ride from HarbourFront - was stepped up.

Indonesian police continued tracking down other members of the group, which was set up in 2014 and called itself Katibah GR.

Their leader Gigih Rahmat Dewa, 31, who was among the six nabbed on Friday, had received funds from Bahrun Naim, a leading recruiter for Indonesians fighting alongside the Islamic State in Iraq and Syria (ISIS), Indonesian police had said.

Mr Shanmugam said that from time to time, Singapore gets reports and intelligence from regional partners about plans to attack and infiltrate Singapore. He did not elaborate, but added: "What Singaporeans need to understand is that the people who want to do us harm are pretty serious, and they will look for many different ways of doing it."

Different types of plans are being thought of and hatched, he said, adding there are places not far from Singapore "where people can come together and plan to attack us".

He outlined three main sources of threats to Singapore.

One, people who gather just outside Singapore and attack the country or plan an attack from there.

Two, people who enter Singapore to stage an attack here. The minister noted that some 200 million people pass through Singapore's borders every year.

Three, home-grown radicalised individuals. Recent attacks in London and Nice showed how knives and vehicles could be used to cause death.

This is why the authorities are constantly looking out for threats, working with regional partners, and picking up individuals within Singapore - even if they are thinking of going abroad to fight.

More Singaporeans are also aware of the risks of an attack, he added, citing how they were signing up for emergency preparedness workshops - including one in Toa Payoh West yesterday where they learnt first aid skills and witnessed a simulated attack by gunmen.

"The message is getting through, but we need to do much more," Mr Shanmugam added. More such programmes will be held over the next two years to train at least one member from each of the one million households, he said.

It was a message underlined by Deputy Prime Minister and Coordinating Minister for National Security Teo Chee Hean at a National Day dinner in Pasir Ris-Punggol GRC.

"All of us can play an active role to stay alert and prepared, and be ready to respond. In peacetime, we must build up our social resilience, so that we can bounce back as one united community should an attack occur," he said last night.

Related Stories
6 terror suspects arrested in Batam for planning to launch rocket at Marina Bay
Rocket attack on Marina Bay a 'real possibility not to be taken lightly'
More About:
terrorist
arrest
crime