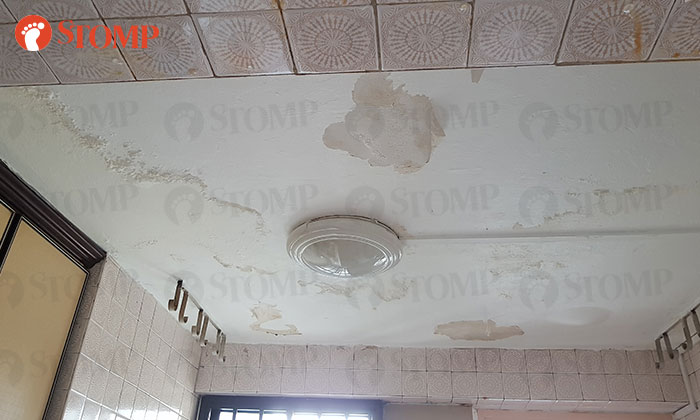 The kitchen ceiling at Stomper Ali’s parents' flat in Block 105, Henderson Crescent had been leaking continuously since Jan 5 due to a burst pipe from their neighbour upstairs, who reportedly refused to bear the cost of the repair work.

Ali told Stomp that his 72-year-old father had gone down to the Tanjong Pagar Town Council on several occasions to inform them about the leak.

Between Jan 5 and Jan 30, the elderly man made a few trips to the town council, but there was no improvement on the case.

On Feb 6, Ali wrote a feedback on his parents' behalf, describing the situation.

He followed up with an email to the town council on Feb 8 and was informed by the property manager that the leak was due to a burst branch kitchen pipe, which fell under the purview of the Housing and Development Board (HDB).

On Feb 10, Ali wrote an email to HDB, and an officer arranged to visit Ali’s parent’s home to analyse the situation.

“The officer was extremely helpful and visited my parents’ house as well as my neighbour’s flat to resolve the issue.

“They did a diversion of the kitchen branch pipe in my parents’ house in March, but the problem persisted.

“In fact, the leak spread to other areas of the kitchen.

HDB eventually determined the source of the leak to be a burst pipe from the neighbour’s house and informed Ali and his neighbour that the maintenance cost for branch pipe falls under the flat owners' responsibility.

However, Ali said his neighbour would not fork the money for it.

Despite Ali explaining to his neighbour how bad the situation was, the neighbour refused to budge.

The neighbour reportedly told Ali that he was 'in talks with HDB' and did not wish to converse with Ali.

Ali told Stomp that he was concerned about his parents' well-being, as well as the property damage, citing that the leak had damaged walls and cabinets in the kitchen.

In response to a Stomp query, an HDB spokesman said ceiling leaks could arise from wear and tear over time, and both the upper and lower floor flat owners need to cooperate with each other to investigate and engage a contractor to carry out the repairs.

"Where needed, HDB can help by investigating the likely cause of the ceiling leakage in their flats on a goodwill basis, and recommending the appropriate remedial action."

The spokesman told Stomp that the HDB block which his parents and their neighbour's flats are located is 44 years old.

"Upon receiving the feedback from the resident in January on water leakage, we inspected the affected unit as well as the unit above it. Repair works in the unit above could only be carried out in March, as the flat owners were not available until then. Despite the rectification works, the leak persisted, " said the spokesman.

Upon further investigation by HDB, the source of the leak was traced to a damaged water pipe in the upper floor unit.

HDB assisted the neighbour with the repairs, which were completed on Tuesday (April 24).

"HDB have made arrangement and repaired my upper floor neighbour's pipe and now under monitoring.

"They mention that my parents' house ceiling will be fixed in 2 weeks time once the damp ceiling is dry.

"I'm relieved that the problem has been dealt with, but I'm concerned with my parents' neighbour.

"I believe that if an incident like this arises in the future, he will take advantage of the authorities again.

"It's unfair that my parents have to suffer because of him."