Sembawang plant-cutting dispute: Family had installed 12 CCTVs, was accused of spying on neighbour 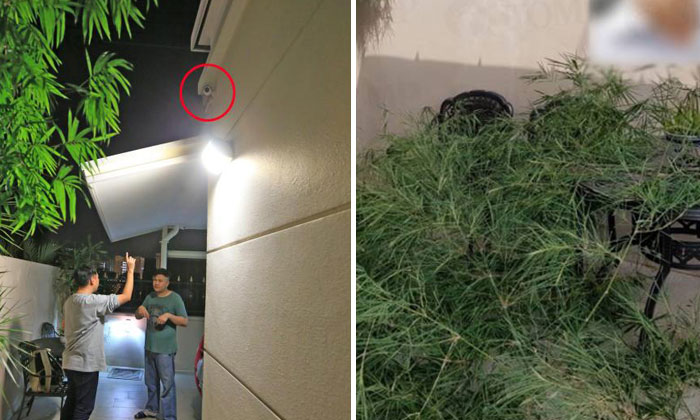 Two neighbours at Sembawang Springs Estate have been in a dispute since one family decided to install CCTVs in 2016.

Stomp was first alerted to the case when Stomper Chris, whose family stays in one of the semi-detached houses, accused his neighbour of cutting plants and hurling the leaves onto his family's compound.

Chris's brother, Eden, told Shin Min Daily News that his family, the Lims, had been living there for more than 15 years, and run many businesses, including the sale of gold and jewellery.

As such, they are subjected by the insurance companies to have the premise under surveillance.

To beef up their security, they decided to install 12 closed-circuit televisions (CCTVs) last year, one of which was placed near a narrow path outside the house.

The placement of that CCTV has since become a point of contention between the Lims and their neighbour, who is accusing them of infringing on his family's privacy.

He said: "My neighbour served me three lawyer's letters in September 2016. They accused us of pointing the CCTV at their pool and violating their privacy.

"We then made an adjustment and planted some bamboo plants to block the view, but they were still unhappy."

On the morning of Oct 10, the Lims discovered that many of the bamboo plants had been cut, and the leaves were scattered on their compound, prompting them to call the police.

Eden added: "This has never happened before.

"It is not a serious issue, and I don't mind them cutting the plants. However, they threw the leaves back.

"What if they had hit my family members?"

Eden also revealed that customers often visit his home to collect goods, and lately, some of them noticed that his neighbours were taking videos of them, even during their transactions in the house.

The Lims decided to call the police again after repeated complaints.

The matriarch of the neighbouring family, Mr Chen, said that his family was irritated by the leaves that fall from the plants into his family's pool every day: "When there's a strong wind, even the branches will fall.

"My family's safety is also affected.

"Since they weren't going to do anything about it, we decided to help them trim the plants and return the parts to them."

Related Stories
Man cuts neighbours' plants and hurl leaves into their compound at Sembawang semi-D
Yishun neighbourly dispute: New video shows women screaming at each other
Yishun auntie who drove neighbour to build 'wall' creates racket in kitchen -- despite having just been arrested
More About:
neighbour from hell
neighbour