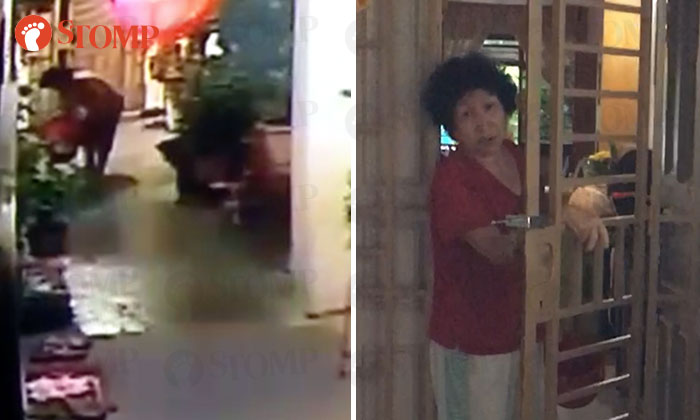 Stomper Andy who stays at Geylang Bahru has been harassed by his neighbour for over nine years.

The elderly woman would scatter rice, salt, and soapy water on the corridor just outside Andy’s flat.

She would also heap verbal abuse on Andy and his family, and use utensils to create a din in the wee hours of the morning.

She even cursed Andy in Mandarin, saying that she hoped that ‘his whole family dies’.

Many of the acts, including her cursing Andy's family, were caught on closed-circuit television (CCTV) footage.

Andy has reported his neighbour to the authorities many times over the years.

Andy told Stomp over the phone that the two households have been neighbours for almost 20 years now, and for the first ten years, have coexisted in peace.

Asked what had triggered the ongoing feud, Andy said that it had started with his family burning incense paper at their own doorstep.

Andy said that the woman complained to the House and Development Board (HDB), citing that ashes had flown into her home.

She then reportedly threw Andy’s joss paper burner and threw it away at the void deck.

When Andy confronted her over the incident she told him:

Andy said that after that, his family stopped burning incense paper at their home.

Despite the compromise, the woman subsequently bought a burner of her own and started burning joss paper.

According to Andy, she would move her burner closer to his bedroom window, so ashes would fly in whenever the wind blew.

Andy later took a photo of her burner and brought the case to the authorities, which prompted the woman to move her burner back to her unit.

“Sometimes, she would go near the service ducts and make a din with cooking pots and pans. She knows that our room is located close to the duct.

“We tried talking to her daughter, but she just told us to ‘shut up’.

“We called the authorities so many times already, but nothing can be done.  They advised us to take legal actions, but we’re so busy working every day, we really have no time and energy to do this.

"Every morning, she makes a din to make us angry and tired even before we start working.

"I work as a driver and this can potentially be a safety hazard.

“All the videos of her harassing my family are evidence but still nothing can be done.

“Do we really need a brawl to break out before action can be taken?"

Stomp understands that a police report was lodged on Sunday (Feb 25), in which the woman alleged that a member of Andy's family had kicked her door at 7am, damaging a piece of plastic placed outside the door.

"The police confirm that a report was lodged, and investigations are ongoing."

Stomp went down to the scene and attempted to speak to Andy's neighbour regarding the harassment cases.

As this reporter was approaching the woman's unit, someone inside suddenly slammed the door shut.

Before the door was shut, the reporter could make out at least two silhouettes in flat.

The reporter rang the bell multiple times but the occupants would not open the door.

Later, a bespectacled man in his 30s, who identified himself as a tenant approached the unit and unlocked the door.

The reporter spoke to the woman briefly, before she replied:

"You just go ask the neighbours. We have no comments."

The bespectacled man also reiterated that the family has no comments.