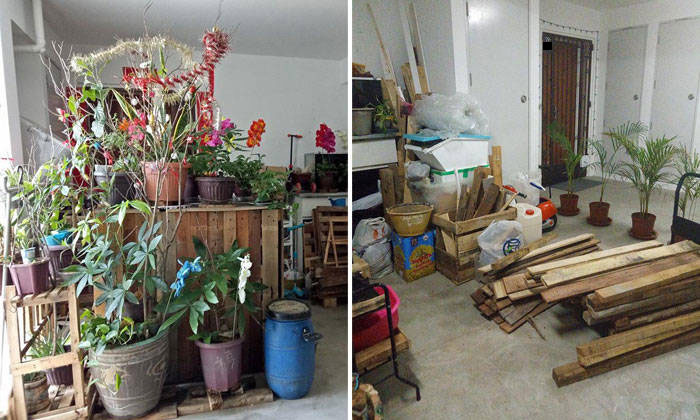 Residents at Block 107C Canberra Street have reached their wits' end regarding one of their neighbours who has cluttered the common corridor on the ninth floor.

Stomper J, who is also a resident at the block, alerted Stomp to the situation and shared photos that were uploaded in the Kampung EastBrook @ Canberra Facebook group.

In the photos, plant pots, furniture and wooden planks are seen taking up space in the common area.

According to one resident who stays on the same floor as the neighbour, she has spoken to him several times regarding the mess but he has only replied rudely.

On Sunday, the neighbour appealed to other residents to sign a petition to get authorities to step in and provide the best solution for all parties.

They suggested that the owner be allowed to place his potted plants at the rooftop garden above the multi-storey carpark.

"It's very untidy," said J, who lives one floor above the neighbour with the clutter.

"I'm scared that the situation will escalate to become like the 'jungle' reported at Pasir Ris a few months back.

"The clutter poses a fire hazard and also a potential breeding ground for mosquitoes.

"This is concerning to us because we have a baby at home."

In May, a Pasir Ris resident who had been cluttering a common walkway with potted plants and bulky furniture made national headlines.

A bulk of the clutter has since been removed following Stomp's report on the matter.