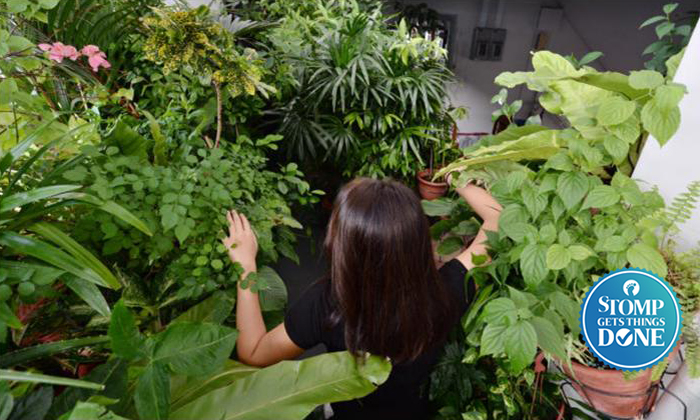 A resident who turned a common corridor at Block 101 Pasir Ris Street 12 into a mini jungle has been served advisories by the town council on multiple occasions, and is currently working with the authorities to reduce the clutter.

In a report on May 24, Stomper A highlighted the situation along her eighth-floor corridor and shared photos of the thick vegetation that was obstructing the walkway.

She told Stomp: "When I raised the issue with my neighbour, she simply said that she loves plants."

According to Lianhe Wanbao, there were over 80 potted plants outside the neighbour's home and the mini jungle measured six metres in length.

The neighbour is reportedly a woman in her 50s who lives alone.

In response to a Stomp query, Pasir Ris-Punggol Town Council said it is aware of the issue.

A spokesman told Stomp in a statement on Monday (May 27): "The Town Council has advised the resident concerned, on several occasions, to refrain from placing excessive potted plants and/or items at the common areas.

According to the Town Council, the resident has since removed the items at the staircase landing.

"While the Town Council understands the resident’s desire to create a high rise garden city, would like to reiterate the importance for residents to maintain obstruction free passageway.

"Residents are reminded to keep the common areas clear of clutter to may hamper medical evacuation and firefighting operations and pose potential fire hazards. This will create a safe living environment for all."