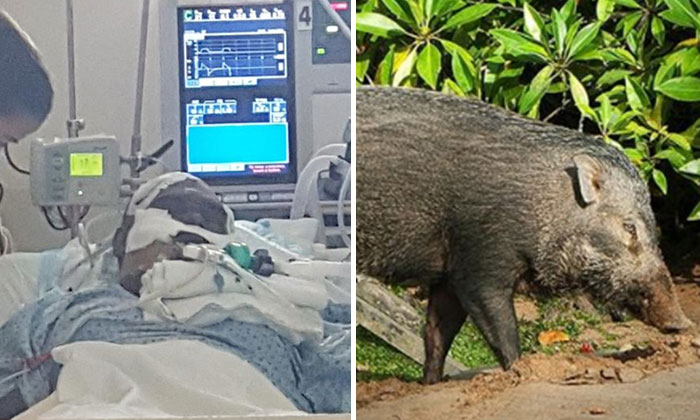 A motorcyclist was left with severe brain injuries after colliding with a wild boar carcass in an accident along the Bukit Timah Expressway (BKE) on Nov 13, 2016.

His family is now seeking compensation over $250,000  from the Land Transport Authority (LTA) and National Parks Board (NParks), reports Shin Min Daily News.

In a High Court pre-trial conference was held on Wednesday (May 23), a defence paper filed by the LTA revealed that closed-circuit televisions (CCTV) had captured the boar running onto the road near Eco-Link@BKE ecological bridge at about 7.03pm on the day of the incident.

A car then hit and killed the boar, and its body was left lying on the second lane for about 13 minutes.

The animal is estimated to have weighed around 80kg.

During this time, other vehicles either drove over the carcass or avoided it.

Vicknesh Morthy, a 25-year-old Malaysian, had been riding his motorcycle to work when he crashed into the boar’s carcass at about 7.16pm.

He was conveyed to National University Hospital (NUH) for treatment and warded for around a month.

Mr Vicknesh was subsequently transferred to a hospital in Malaysia for treatment.

His brother, Sasithiren said that the family had initially thought that his brother had lost control of his motorcycle while attempting to avoid the wild boar, but later found out that the boar had already died by the time of the accident.

He added that his brother now requires round-the-clock assistance, and depends on a wheelchair for move around.

Furthermore, the brain injuries have also impaired Mr Vicknesh’s cognitive ability, with Sasithiren being appointed by a court order to represent him.

Mr Vicknesh's lawyer N. Srinivasan, said that the LTA which is responsible for maintaining the land transport system, and the NParks, being the relevant statutory body, should have been aware of the animals as well as the dangers they pose.

He added that the two agencies also did not warn the road users about these dangers.

As such, the family is suing both LTA and NParks for negligence.