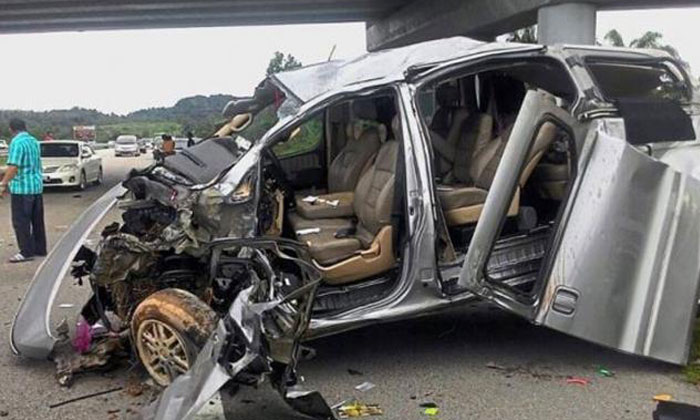 A trip to Kuala Terengganu for a family of 10 from Shah Alam, Selangor, and Kodiang, Kedah, ended in tragedy after six of them died in an accident.

Of the six, three were children.

The driver of the MPV was Ahmad Nasal Abd Rahman, 52.

Ahmad Nasal suffered minor inju­ries and was sent to the Ke­­maman Hospital together with his three other children - Quratul Ain, 14, Ahmad Shakir, 12, and Ahmad Mukriz, three - who were badly injured.

The incident occurred at the 288th kilometre stretch of the East Coast Expressway, near the Chukai toll exit about 6.10pm yesterday.

It was learnt that the group had earlier attended a wedding in Felda Jengka in Pahang and were on the way to meet Ahmad Nasal's son who is studying at Universiti Sultan Mizan Zainal Abidin in Gong Badak near Kuala Terengganu.

According to police, the MPV veered and hit the divider before ramming into the pillar of an overhead bridge apparently after one of the tyres blew, causing Ahmad Nasal to lose control of the vehicle.

Witness Siti Nazirah Embong, 28, who was driving close to the MPV when the accident happened said: "All of a sudden I heard an explosion and saw the MPV swaying before hitting the divider.

"It spun at least three times be­fore ramming into the pillar of the overhead bridge and catching fire. I also saw some of the victims being thrown out," she said.