Another tree falls on road, this time at Tuas Ave 4 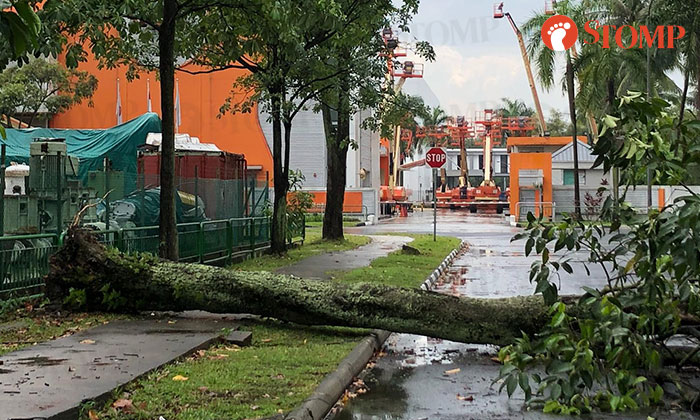 Stomper Chan and Hwa came across a fallen tree at 28 Tuas Avenue 4 this morning (June 20).

Stomper Hwa came across the tree as he was leaving his office at around 10.50am.

"I think the tree could have fallen after getting struck by thunder.

"There was no loud sound, and the tree had already fallen when I came out from my office.

"I also saw some workers but I'm not sure if they are from the construction site nearby."

Chan told Stomp that he had come across the tree at 10.30am.

He said that the tree fell across the road, blocking off both lanes.

Chan also snapped photos and sent them to Stomp.

“There was no one around when I first saw it.”

When Chan left his office around five minutes later, there were some workers at the site.

“I just hope no one was hurt.

“Recently, there seems to be a lot of such incidents.”

This comes after another tree fell and obstructed traffic at Holland Road last Friday (June 15).

There were also two incidents in May, where a tree fell on a carpark barrier at Block 308 Clementi Avenue 4, and another directly on a car at Telok Blangah.

Stomp understands that the fallen tree was measured 1.6 metres in its girth.

It was of the syzygium grande species, a kind of sea apples.

The tree was cleared around 10.45am, and there were no reported injuries or damage.