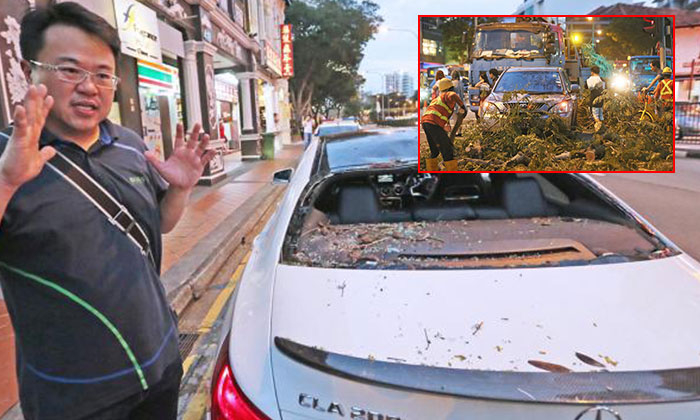 A tree fell onto two cars along Balestier Road on Monday evening (Feb 5), shattering windscreens and damaging the vehicles.

The incident happened at a traffic junction between Boon Teck Road and Balestier Road on Monday, at about 6pm.

Shin Min Daily News was alerted to the incident and reporters rushed down to the scene.

They observed that one of the cars was covered by leaves, while the other, a Mercedes was parked by the side of the road.

The Mercedes driver, Mr Lin De Jie, 44, said that the lights had just turned green and he was travelling in the middle lane at the time of the incident.

He suddenly heard a bang, turned and realised that the left side of his car was surrounded by branches.

“I drove forward a little and stopped by the side of the road. After I checked, I realised that my windscreen had cracked, and the left side of the car was badly dented.

“There were also some glass fragments on the rear seats. Fortunately, no one was injured.”

The owner of the other car, Ms Nazreen, 40, recalled a harrowing experience.

Her husband had been driving the car and the two were on their way back home.

As they were nearing the site of the incident, they started realising that a tree in front was falling.

The couple tried to stop their car but could not do so in time.

“Right in front of us, the tree fell onto the car bonnet. A second more and it would have hit us instead. We are lucky to escape unscathed.”

Related Stories
Driver recounts close shave with fallen tree: "It could have been me underneath"
Huge branch pierces car's windscreen at Jalan Bukit Ho Swee
Another tree uprooted in Yishun, this time falling on multiple vehicles
More About:
tree
damage
Balestier
fallen tree