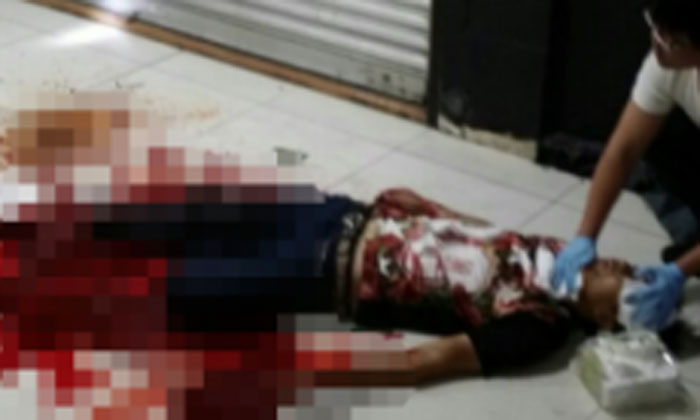 One told us she was no stranger to bloodstains.

Three others said vomit, footprints, cigarette butts and spit were a common sight.

All four work on the fourth storey of Orchard Plaza.

They also said fights were frequent.

The New Paper went to the eight-storey shopping centre next to Orchard Point on Monday (Nov 28) following a slashing incident on Sunday in which a 28-year-old man landed in hospital.

A florist at Flower Flowers, who wanted to be known only as Miss Ang, told TNP:"It's normal to see bloodstains smeared on the glass window in front of my shop when I come to work in the morning."

She also said fights had caused the glass to shatter four times before and damage a computer inside the shop once. But she managed to claim the cost of the damage from the building management.

The last time there were bloodstains on her shop's glass window was about six months ago, before she installed a closed-circuit television camera. Miss Ang has been operating there for about nine years.

Ms Cecilia Nana, 47, owner of maid agency One Employment Solutions And Services on the fourth storey, also said that cigarette butts and spit on the floor outside her shop were a common sight.

She told TNP: "I think this place can be quite dangerous.

"Sometimes I see footprints or spit on my glass door. I'm worried that some day, some drunkards would break the glass."

The police said they were alerted to a case of "voluntarily causing hurt by dangerous means" at around 5.50am.

They have arrested a 23-year-old man.

TNP understands that the victim suffered cuts on his neck and head.

Shin Min Daily News reported that the fight was over a woman of an unknown age and that the attacker and the victim had been arguing.

The attacker and his group of friends were later having supper at a Thai eatery when the victim and his friends walked past.

The attacker ran up to the victim, and punched and kicked him for about three minutes. The victim's friends tried to stop the fight but failed.

Before the attacker fled with his friends, he slashed the victim with a knife, causing him to bleed from the head.

A nurse who was at the Thai eatery witnessed the incident and attended to the victim, reported Shin Min.

She and employees from Starz Singapore nightclub tried to stop the victim's bleeding with ice and tissue paper.

Photos of the incident were shared on Facebook page Best Viral Videos yesterday.

Starz Singapore said in a Facebook post that the incident was not "linked to our club at all".

The victim's injuries were not life-threatening, Shin Min reported after visiting him in hospital.