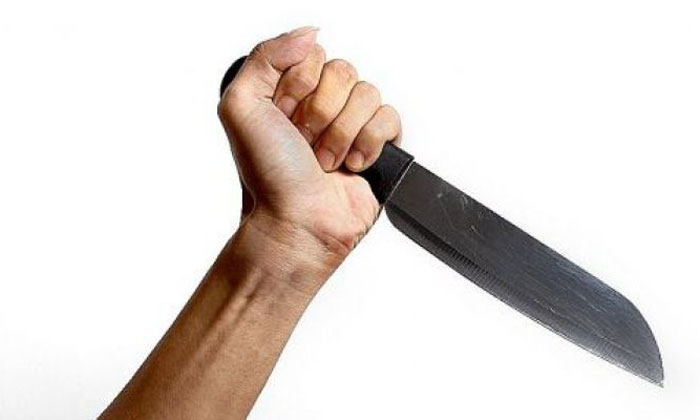 The attack on his wife was so savage that he severed her jugular vein - a large blood vessel in the neck - with a knife.

Her Indian national husband, Krishnan Karunakaran, 45, pleaded guilty in court yesterday to one count each of criminal intimidation and attempting to commit culpable homicide not amounting to murder.

A second criminal intimidation charge and one count of attempting to voluntarily causing grievous hurt will be taken into consideration during sentencing.

The couple were married in a temple wedding ceremony in India in January 2011, but they did not register their union.

Krishnan came to Singapore in July 2012, but the marriage soon soured.

The couple, who have a daughter together, separated about a year later, and Madam Boomichelvi told him not to return to her flat at Block 244, Hougang Street 22.

She gave him back his passport and told him to remove his possessions from the flat.

As she was taking a lift to her home on the fifth storey, he ran up the stairs and caught up with her at the corridor.

When he asked to see their daughter, who was then a year old, she turned him down and closed the door.

Upset, he left the premises, went to a Little India supermarket and bought a knife with a 12.5cm-long blade.

He returned to the block the next day and waited for Madam Boomichelvi at the first-storey lift lobby.

At around 8.20am, Madam Boomichelvi left her home for work and took a lift down. Krishnan immediately barged in when the doors opened at the void deck.

He suddenly pulled out the knife from underneath his singlet and pointed it at her stomach.

He repeated his demands and when Madam Boomichelvi refused, he pulled her hair and exclaimed: "I want to see the baby now!"

Video footage from a closed-circuit television camera inside the lift was played in court yesterday.

It showed Krishnan backing her into a corner before assaulting her.

During the struggle, he pressed the button for the fifth storey. When the doors opened, he pointed the tip of the knife against her spine and made her walk towards her front door.

Fearing for her life, Madam Boomichelvi did not put up a struggle and called out for her Indian national maid, Ms Murugesan Buvaneswari, now 30, when they reached the door.

The maid opened the door and Krishnan shouted at her in Tamil: "Open the gate!"

When Madam Boomichelvi heard this, she shouted: "Don't open!"

This made Krishnan angry and a scuffle broke out between the couple during which he pointed the knife at her throat.

Yesterday, Deputy Public Prosecutor Mohamed Faizal Mohamed Abdul Kadir said: "The victim and the accused struggled for some seconds before the accused suddenly pulled the knife away, leading the victim to assume that the accused had ceased trying to hurt her.

"Suddenly, the accused attacked the victim by slashing her throat from her left to her right once with his knife."

Blood gushed out and he shouted "Die!" in Tamil at her before running away.

Ms Murugesan opened the gate and rushed out to help Madam Boomichelvi.Her nine-year-old daughter, from a previous marriage, called the police.

Krishnan also called the police at the void deck at around 8.40am and told an officer: "I stabbed my wife at the neck accidentally due to a family problem. I was threatening her with a knife when she came near to hit me, the knife hit her neck."

Officers arrested him when they arrived minutes later.

Madam Boomichelvi was taken to Tan Tock Seng Hospital (TTSH), where she was found to have a 3cm horizontal slash wound on her neck.

Krishnan, who is represented by lawyer Eugene Thuraisingam, will be back in court on Friday. For attempting to commit culpable homicide, he can be jailed up to 15 years and fined or caned.