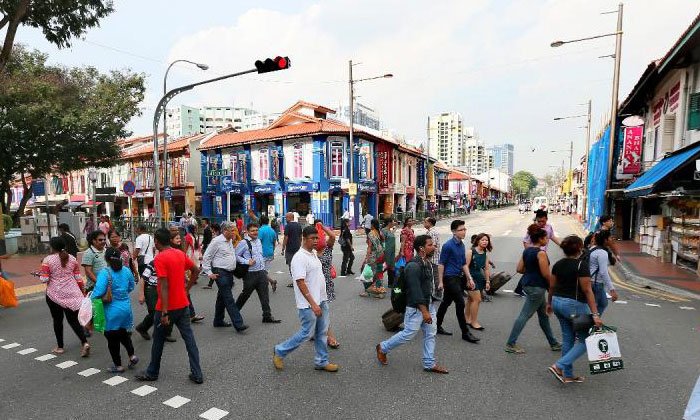 Say "Little India" and some things may come to mind.

Super-packed 24-hour shopping paradise Mustafa. Iconic eateries such as Komala Vilas and Muthu's Curry. Pedestrians with an elastic understanding of traffic rules. Crowds of foreign workers who hang out there on weekends.

Most people would agree it is gritty and colourful at the same time.

But Mr Roy Goh Hin Soon wrote in to The Straits Times Forum, saying that as a "tourist belt", Little India is "not as organised as Chinatown".

In his letter, he said narrow walkways in the neighbourhood are safety hazards and added that local businesses that operated in the area had no relevance to tourism.

Furore resulted. Comments defending the area shot back from Singapore readers and discussion raged on social media. Many said Little India was unfavourably compared with Chinatown, which they felt lost its character after heavyhanded overhauls that took place there in the 1990s.

"Artificially creating a hawker street in Chinatown is what completely killed the authenticity of the place," says tuition teacher Junie Tang, 46, who used to work out of Chinatown six years ago.

"Sure, it might have nice buildings, but tourists are looking for the real deal - they can see a constructed set-up from a mile away."

"Heritage is cultivated over time and is something that cannot be re-created. That authenticity is what people - both locals and tourists - relate to," she adds.

"It is not to say that heritage spaces cannot be improved over time, but this should not be done at the expense of the people, functions and interactions which give a place its recognisable character."

Tourists seem to agree. In Little India, The Sunday Times spoke to Ms Marissa Lee, a 19-year-old American college student who was visiting Singapore with her family.

She says: "This neighbourhood makes me truly feel like a part of Singapore - you can get so many different dishes and the colours and smells are amazing. Who wants to visit another air-conditioned mall? I would much rather walk around here, preferably with a nice mango lassi."

For the area's local businesses and residents though, Little India will always be home, whether or not they profit from the tourist dollar.

Five faces from the neighbourhood talk about why they feel such a deep belonging and why they love it - just the way it is.

Heritage neighbourhood gentrifying at its own pace

If you look at the freelancers who dock at co-working space Workhouse, you would not say Little India is hyper-local and unattractive to foreigners.

Stepping into the shophouse space in Upper Weld Road, you are likely to see an international crowd tapping away at their laptops.

They could be working on an online grocery start-up (HappyFresh), organising a music festival (Neon Lights) or just stopping by to check their e-mail messages while backpacking through Singapore.

About 70 per cent of the clients are expatriates, says Workhouse owner Kunal Pawa, 30.

In response to a letter calling for a cleanup of Little India to appeal more to tourists, he says the neighbourhood is gentrifying at its own pace.

The new shops "add to the charm of the neighbourhood in an organic fashion", Mr Pawa says. "This heritage neighbourhood doesn't need any heavy-handed changes made to it."

Software engineer and entrepreneur Dominique Kon, 43, has been working out of Workhouse for the past two years because he likes the central location and food options.

There is a misconception that Little India is busy and noisy all the time, he adds.

"The area is actually very quiet for the most part, with people just going about doing their own work.

"This makes it fascinating to tourists and expatriates - it is so different from the rest of Singapore, yet it has its own energy."

Full-time footballer Zulfadli Zainal Abidin is no stranger to the Little India district. Since he was 15, he has trained at Jalan Besar Stadium.

When the Warriors FC left-back player got married in January last year, he bought a four-room Housing Board flat in nearby Bendemeer. Four months ago, he moved his halal dessert shop Zulos Cafe from Clementi to Syed Alwi Road.

He runs the 700 sq ft cafe, which specialises in waffles and churros, with his wife Nur Sherillin Mohamed Jabbar, 27. Its neighbours are traditional provision shops and car mechanics.

She says Little India is "very vibrant and still has a lot of untapped potential" for young businesses looking to set up shop there.

"A lot of older, mature neighbourhoods already have big players that are established there, so it's no surprise that many young entrepreneurs are attracted to Little India."

Her husband, who turns 29 this year, refers to their neighbourhood as a "mini United Nations".

The backpackers and tourists who stay in the area make up a sizeable part of their clientele.

She adds that assumptions that the area is dirty or unsafe are unfounded. The couple have also made friends with many foreign workers who live nearby.

"Some of these men have helped us without expecting anything in return, going so far as to carry items and move heavy equipment when they saw us struggling to do it alone," she says. "This neighbourhood is very warm."

When third-generation hawker Li Rui Fang decided to quit her job at a Japanese multi-national company to take over her father's prawn noodle stall four years ago, she ventured away from his original location in Whampoa and open at Tekka Centre in Little India instead.

"I was looking for a new location and was contemplating Chinatown. But after visiting Tekka, I stopped looking," the 33-year-old says. "I loved how spacious the place was and how it was central and minutes away from an MRT station. I was sold from the get-go."

Today, the young hawker runs the new stall with her parents - the outlet in Whampoa is managed by her aunts - and starts selling food at 6.30am.

"I am here by 2am every day to start my preparations and, though the area is quiet, I have never felt unsafe," she says. "Cleaners are also regularly cleaning up the area, which has helped keep the space more neat and hygienic."

When asked about Little India being deemed too messy and disorganised to attract visitors, Ms Li says many of her local customers travel from far and wide to eat at Tekka Centre.

Tourists, in turn, are often drawn to stalls with long lines and are more open to trying out unconventional food when they see locals tucking into the dishes.

"I do agree that ventilation and cleanliness can be improved in Tekka Centre, but enforcement is already under way to try and make that happen," she says, mentioning that there has been word about the food centre undergoing a renovation in the near future.

"A place like Little India that sees such a high volume of people is undoubtedly going to get a little crowded sometimes, but neighbourhood means a lot to Singaporeans of all races. I don't think it needs to be changed too much. It is fine as it is."

In its 21-year history, North Indian restaurant Jaggi's has been nothing but loyal to Little India.

It has moved around several locations, but stayed in the neighbourhood, starting from a small shop in Kerbau Road in 1995.

Two years later, it moved into a shophouse in Race Course Road. Regulars will probably be most familiar with this address as the restaurant stayed here for 19 years. Its no-nonsense, canteen-like atmosphere belied the authentic Punjabi dishes. Its specialities include butter chicken and masala chai.

Now, that outlet is temporarily closed for renovation and Jaggi's has moved around the corner to a shop in Chander Road, where it will remain until the end of the year.

Owner Gurcharan Singh, 57, says his restaurant will always have a presence in Little India. Jaggi's also has two outlets in the Central Business District.

He says: "No other place in Singapore has the same authenticity and vibrancy as this neighbourhood. It's one of a kind.

"People who visit Little India regularly have their routines - they have grocers they prefer and restaurants they love, many of which have been in Little India for decades."

Mr Singh, who is also vice president of Indian Restaurant Association Singapore, knows of the suggestion by a letter writer to "clean up" Little India so it becomes a more palatable tourist destination.

He agrees insofar as infrastructure is concerned, such as having a centralised bin disposal area. But he thinks the Government should leave the businesses, even the ones not catering to tourists, alone.

"The buildings in this area are truly part of our heritage - these were built at a time when Singapore was just coming up and industry was just starting," he says.

His oldest son Jagwinder Singh Nerwal, 31, who helps run the family business, says overzealous overhauls could turn off Singaporean customers. Half of Jaggi's clientele is local, he adds.

"The attraction of Little India is that it is not only traditional, but also multi-faceted and diverse. Being too heavy-handed for the sake of organising the area for tourists may drive away local business from shops and restaurants."

Mr Vikneshwaran Kobinathan, 29, is a programme manager at local indie cinema The Projector. For the past 19 years, the film geek has been living in Little India, in a four-room Housing Board flat just behind Tekka Market, with his family.

The bachelor says he cannot imagine living anywhere else. One of the reasons is the area's authenticity, its "organised chaos".

"Here, you can find a grocer next to a sari shop which is next to a mechanic or a temple. It isn't sanitised like what we have come to expect from so much of Singapore."

It is also multicultural. He says: "To this day, people are surprised when I tell them my immediate neighbours are Chinese or that many old businesses in the area are operated by Chinese and Malays."

But he has not always been this passionate about his neighbourhood. When his family moved from a landed property in Sophia Road to the Tekka flat, he admits to missing his old home deeply. "I felt a bit uncomfortable telling people where I lived, especially when schoolmates or strangers passed snide judgments about the neighbourhood."

And while he still receives the occasional insensitive comment about his neighbourhood being messy, he has decided to focus on the positive. He feels a deep affection for the old shops of his childhood, which are still surviving, such as the barbershop at Little India Arcade where he has cut his hair his whole life.

"Residents and business owners know one another personally, whether it's the guy I buy sandwiches from or the cobbler who mends my shoes. It's a sense of community that is rarely found anymore in urbanised Singapore."