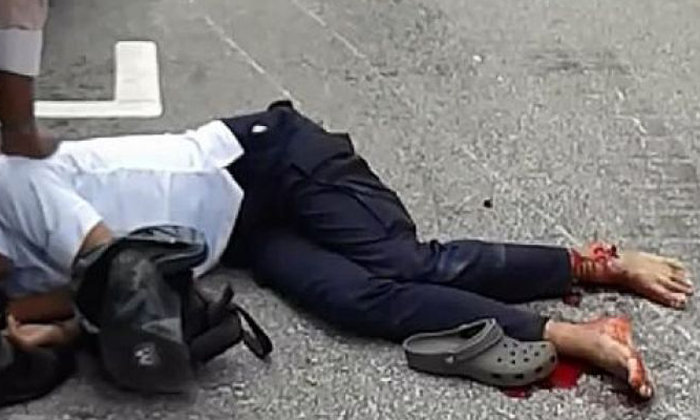 When she heard a loud crash, a coffeeshop assistant turned around and saw a motorcyclist lying on the road.

His motorcycle lay on its side about 10m away from a white car believed to have been involved in the accident in Little India yesterday.

Ms Yi Da, 28, told Shin Min Daily News that the biker was bleeding from his legs.

The police later said the collision at Dickson Road, near the junction of Perak Road, involved a motorcycle and two cars soon after 11am.

Another witness told The New Paper that he could see a bone sticking out of the victim's bleeding left foot.

Giving his name only as Mr Lu, he said in Malay: "There were about 50 people watching, but most moved away after they saw the rider's leg injuries."

Mr Lu, 65, who is in the karung guni trade, said only a man then went to comfort the biker before the paramedics arrived, while some passers-by helped to guide traffic and warn motorists about the accident.

"The rider was wailing in pain. All the man could do was to tell him not to move and assure him that help was on the way," said Mr Lu.

While he did not know the identity of the Good Samaritan, he said he had occasionally seen the middle-aged man at a nearby coffee shop.

The man was photographed standing beside the motorcyclist, believed to be a food delivery rider from Deliveroo.

From the photos, it could be seen that the biker was not wearing a riding jacket or boots.

"The rider's big food delivery bag was at the side of the road nearby. I saw he had other injuries on his body. His bloodied slippers are still here," Mr Lu said.

Deliveroo did not respond to TNP's queries by press time.