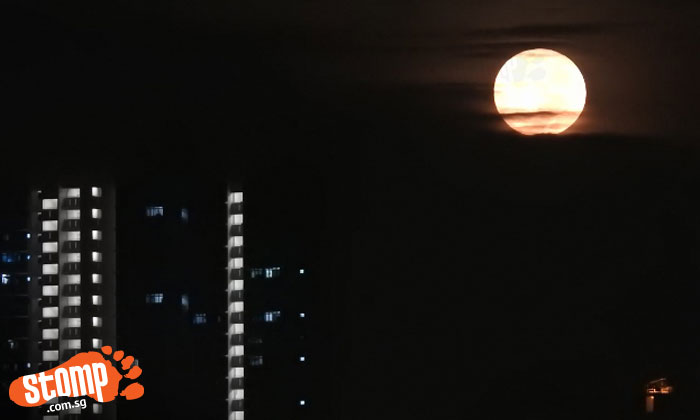 Still upset over missing last year's Supermoons? Well, we are positive you would not have missed The Full Wolf Moon shining brightly in our skies at around 8pm yesterday (Jan 12).

In fact, it was a better sight than the Supermoons of 2016 altogether.

And if you did miss this first full moon of 2017, Stomper Kannan has captured beautiful pictures of the moon in the Woodlands evening skies -- which you can check out in the gallery.

"The moon was expected to reach its highest point in our skies at midnight.

So you might be wondering, why the name 'Full Wolf Moon'? According to a report by International Business Times, the name was given by the Native American tribes during colonial times -- due to the constant howling they would often hear from the hungry wolves in winter.

According to Space.com, a full moon appears in the sky every 29.53 days. The event marks the moment when the Earth, moon and sun are all in line, with Earth in the middle. This alignment causes the lunar near side to appear fully illuminated.

Related Stories
Surreal photos of the moon seen in the skies of Woodlands that will leave you mesmerised
Check out the biggest Supermoon in 70 years: In Singapore tonight from 6.46pm to 9.52pm
Check out Stompers' photos of the Supermoon from all over Singapore and beyond!
moonshot
supermoon
full moon
beautiful
amazing
gorgeous
nature
Wolf Moon