Check out the biggest Supermoon in 70 years: In Singapore tonight from 6.46pm to 9.52pm 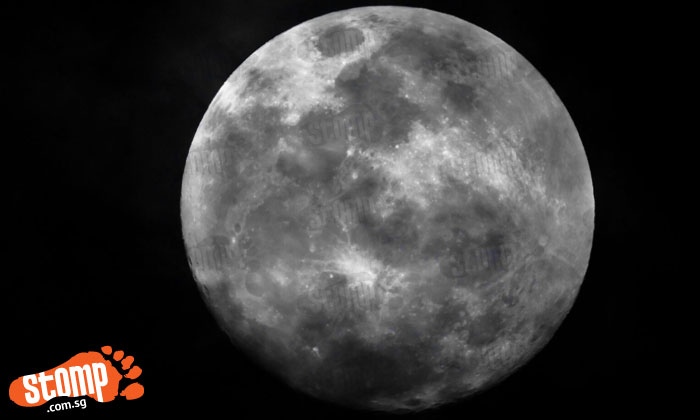 Stomper Kannan took the following photos of the Waxing Gibbous Moon yesterday (Nov 13) from his flat in Woodlands at around 9pm.

"The Supermoon will rise today (Nov 14).

"And if weather permits, the moon is expected to look bigger and brighter.

"Readers should try not to miss this rare occurrence, because this is happening for te first time after seven decades!

"The weather looked bad this morning, but hopefully the skies will clear and we will all be able to catch it later."

Do not be alarmed if the moon does not appear to be closer to the naked eye, according to Kannan the Supermoon is just an "illusion" of it appearing closer.

"The moon will be orbiting closest to the Earth, but we will not be able to tell. It will look the same to us.

Kannan suggests those interested to download the free "Skyview" app which is very useful to track and check the exact location of the planets and stars.

"If you're planning on catching the Supermoon tonight, you'd want to be somewhere with less obstructions to your view of the sky.

'Places like Punggol, Sengkang or even Sembawang are some good areas, as they have less high rise buildings.

"Just make sure your that you're facing the east, as the moon rise from the east."

According to timeanddate.com, the moon will rise in the east at 6.46pm this evening and set in the west at 7.18am the next morning.

In Singapore, the moon will become a full moon at 21.52pm, reported International Business Times Singapore. It will be nearest to the Earth about two hours before that.

Do not forget to catch the moon tonight guys!

According to EarthSky, a Supermoon is a new or full moon that closely coincides with perigee - the moon’s closest point to Earth in its monthly orbit. The term was coined over 30 years ago by an astrologer named Richard Noelle.

Not many in astronomy however, use it.

Nolle has defined a supermoon as:

A new or full moon which occurs with the moon at or near (within 90% of) its closest approach to Earth in a given orbit.

With that said, the new moon or full moon has to come within 361,524 kilometers (224,641 miles) of our planet, as measured from the centers of the moon and Earth, in order to be considered a supermoon.

According to Noelle’s definition of a supermoon, the year 2016 has experienced a total of six of them. The new moons of March, April and May and the full moons of October, November and December all qualify as supermoons.