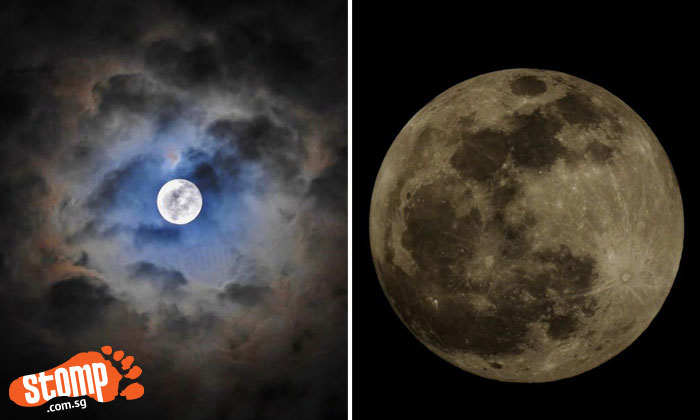 Stomper Kannan managed to take some gorgeous snapshots of the moon from Woodlands on Sep 16 and 17.

He shared with us the photos and gave descriptions about what he had taken.

Here's what he had to say about his beautiful images:

"This day is a day after the Mid-Autumn Festival in Singapore. I saw the moon at its fullest.

"The Chinese believe the full moon to be a symbol of prosperity, happiness, and family reunion.

"Mooncakes are common and people eat it to celebrate the Mid-Autumn Festival.

"The full moon during the Mid Autumn Festival is also known as the ‘Harvest Moon’.

"During the autumn equinox, the moonrise and sunset timings are close to each other for several evenings. The next autumn equinox is on September 22.

"The Penumbra Lunar Eclipse was visible this morning in Singapore, thanks to the clear skies.

"This eclipse is believed to be the final eclipse of 2016 coinciding with the Full Harvest Moon and the next such eclipse will only be seen in 2024.

"According to predictions, the penumbral eclipse can be seen from Europe, Asia, Africa and Australia.

"In Singapore, the eclipse peaked at about 2.55 am this morning with clear skies.

"I managed to capture some shots of the lunar eclipse and the lunar halo this morning till the peak of the penumbral eclipse at 3am from Woodlands.

"Information from the web reveals that Earth has two types of shadows, the penumbral and umbra.

"The umbra is the central cone of darkness that tapers away from Earth, and the penumbra is a much lighter shadow that spreads out from the edges of the umbra.

"What was seen in Singapore this morning is a penumbral lunar eclipse where the full moon moved into the light shadow.

"The penumbral eclipse is very subtle, and that is why we are only able to see faint shadows in the upper quarter of the Moon’s disc compared to the partial and total lunar eclipse where we could see the moon covered by the darker shadows.

"In Singapore, the eclipse was calculated to last exactly for three hours and 59 minutes.

"Another spectacular sight this morning was the lunar halo appearing round the moon."