Check out Stompers' photos of the Supermoon from all over Singapore and beyond! 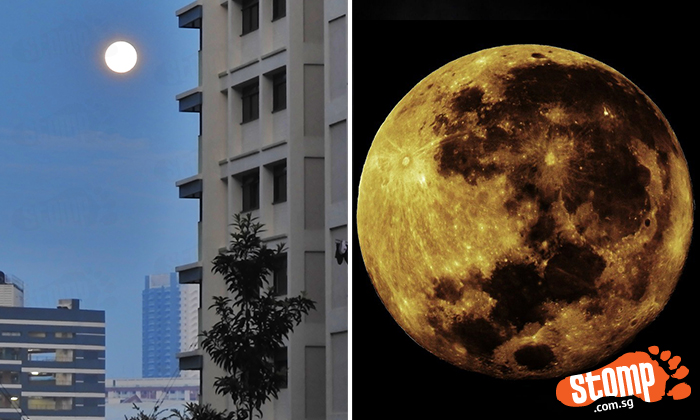 Did you managed to catch the Supermoon yesterday (Nov 14)?

If you did not, fret not.

While many Singaporeans have lamented that the cloudy sky was hindering their view of the Supermoon, Stompers all over Singapore and beyond have sent in photos of the elusive moon.

According to EarthSky, a Supermoon is a new or full moon that closely coincides with perigee - the moon’s closest point to Earth in its monthly orbit.

The term 'Supermoon' was first coined by a astrologer named Richard Noelle.

It is supposedly an uncommon occurrence and 2016 had experienced 6 of those thus far, although yesterday's was supposedly the closest Supermoon of the year.

" The night was marred by rain and cloudy skies over Singapore the entire day but within several hours, the full Moon was back to its splendour this morning after 5 am due to clearer skies.

" I managed to capture the full moon this morning from Woodlands between 6.10 am till about 6.45 when the moon started to disappear into the clouds.

"This morning sighting was really worth the wait, as the moon still look bigger and brighter a day after the 'Supermoon phenomenon' illuminating the pre dawn skies.

"Fortunately, I got an unobstructed view of the moon from my flat!

"The large, dark, basaltic plains on the moon's surface known as 'lunar maria' believed to be formed by ancient volcanic eruptions were clearly visible upon close up shot of the moon.

"Readers may wish to know that the images were captured using Nikon P900 which can zoom to the craters of the moon, though there may be limitations compared with using other high end equipment.

"This morning (Nov 15) the moon appeared to look much bigger and brighter than normal.

If you have any photos of the Supermoon, do share with us by sending an email to stomp@stomp.com.sg

Related Stories
Check out the biggest Supermoon in 70 years: In Singapore tonight from 6.46pm to 9.52pm
Eunos residents spot Planet Venus and Red Moon from 16th-storey flat
Catch Venus, Mars and Saturn in Singapore skies this September
moon
supermoon
moonshot
Check out Stompers' photos of the Supermoon from all over Singapore and beyond!