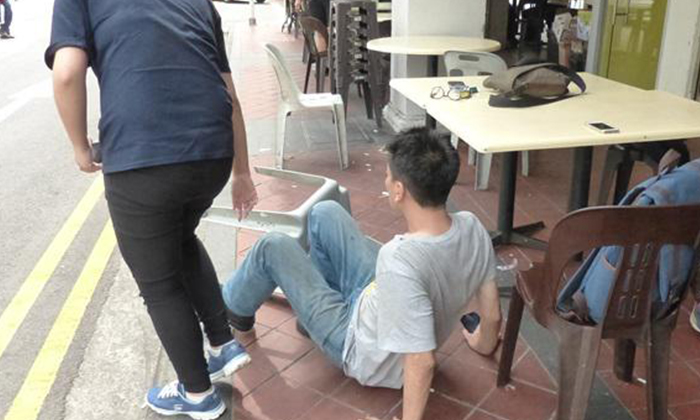 Unsatisfied with his girlfriend’s wages, a 43-year-old self-employed man repeatedly went on rampage at the stall where his girlfriend worked on three occasions, hurling vulgarities and even assaulting stall assistants.

The series of harassment reportedly started on Jan 13, at a small roasted meat eatery located at Neil Road in Chinatown, reports Lianhe Wanbao.

The perpetrator told reporters that his girlfriend works 12-hour shifts at the stall but receives only $80 a day.

Even though she was fine with the arrangements, he was upset at the ‘injustice’ and hence, decided to confront the stall owner.

A 31-year-old stall assistant said the perpetrator had suddenly arrived at their stall on a friday two weeks ago and started hurling vulgarities at two of his colleagues, continually taunting them while claiming that he was the revered ‘Geylang Tiger’.

He also accused the stall assistants of being illegal workers.

“We are all legal workers, and whenever he comes to find trouble here, he chases away customers.

Another 44-year-old stall assistant also said that the man came over again the next day after the first episode on friday.

The perpetrator even slapped him on his back, leaving a visible imprint.

“He wasn’t kidding around when he slapped me and my back has been aching for two days from his slap.

“When we called the cops, he even lied that we threatened him with a knife, but there are CCTVs here that can prove our innocence.

“We even kept the knives in the stall because we were afraid he might use them on us.”

The police were activated again and arrested the perpetrator.

However, a few days later, the perpetrator came back again with another accomplice to cause trouble at the stall, and the assistants were forced to call in the police again.