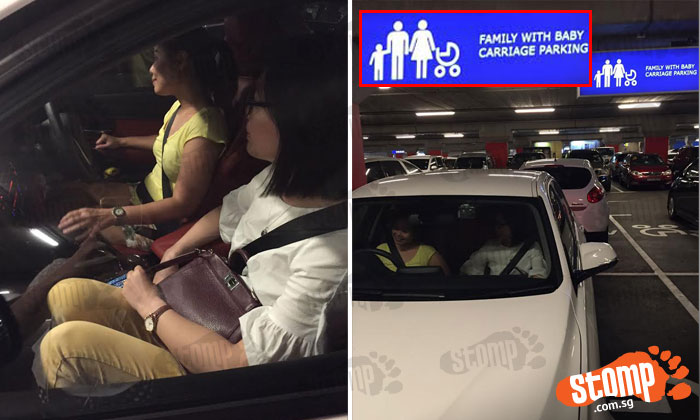 Stomper Matt shared an unpleasant encounter he had at a carpark in IKEA Tampines yesterday (Jan 8) at around 2pm.

In a telephone interview, the Stomper said that he wanted to drive his car into an empty family lot. He had two children on his car and needed the extra space in the lot designated for drivers with baby carriages to unload his prams.

Just as he wanted to move into the lot, a woman drove her white BMW in and occupied it.

He recounted his experience:

"To our surprise, the female driver came out of the car with another lady and immediately walked away.

"They did not have any baby carriages or kids in the car at that point of time. We confronted her and she said that she was there to pick up her kids.

"We gave her the benefit of the doubt and went to do our shopping.

"When we were in the mall, we saw the both of them again still without children or baby carriages.

"After about an hour, I went down to prepare my car for my family to board after we were done shopping.

"I saw the BMW driver and the lady again as they were getting into their car.

"Like before, she did not have any baby carriages or kids together with her.

"When we confronted her a second time, she said she had a change of plans and was not picking up anyone."

In a video the Stomper sent showing the second confrontation, the female driver can be seen trying to explain her actions to him.

When the Stomper asked her where her baby carriage was, she said that she was waiting for somebody but had to change her plans due to 'harassment'.

"Because of you, I have to leave."

The management was then alerted to the incident thereafter. Matt said they informed the woman to leave the parking lot.

The Stomper also left the carpark after that.

"I had spoken to the management and they said they will take action against such drivers who misuse the lots meant for families with baby carriages in future.

"I want drivers out there to know that we should not be selfish and let those who truly need the parking lots have them," said Matt.