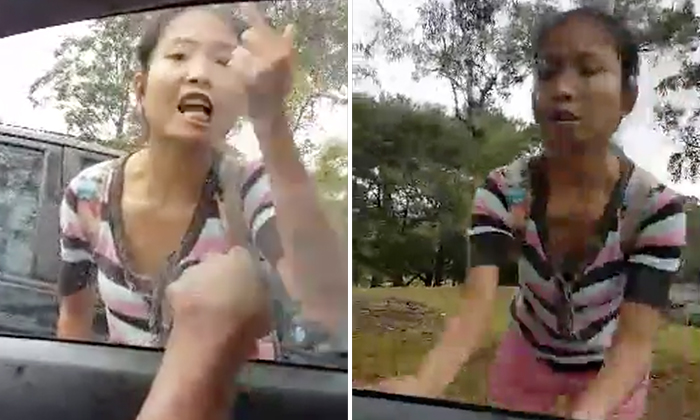 Facebook user Ramzy Alamudi posted a video showing an aggressive woman who was harassing him and his wife at a carpark in Macquarie University, situated in Sydney; banging on their vehicle’s windows, tugging at the door handles and hurling racial slurs at his wife who was wearing a niqab, a form of veil worn by Muslim women.

The incident was captured on a video and uploaded onto Ramzy’s Facebook page.

According to Ramzy, the incident happened on Friday (Jan 20) and  arose after his wife noticed the woman staring and decided to smile and wave back.

However, the polite gesture instead invoked rage in the woman and she flicked her middle finger at his wife.

The enraged woman then proceeded to run towards their vehicle while hurling abuse at his wife, asking her to take off her veil, prompting Ramzy to ask his wife to lock the vehicle and record the incident on film.

Ramzy was perturbed by the woman’s reaction but decided not to confront her, only stepping out to talk to the woman when she attempted to snap off his vehicle’s wipers.

He moved the abusive woman away from the vehicle while his wife dialled for the campus security, which swiftly removed the woman.

The couple also noticed that she had a infant in her own vehicle, and found out that she was a student at the same university.

“I’m glad this happened to me as opposed to another innocent person who might not have been capable of defending themselves.”

The university has also issued an official statement on the incident:

“As reported on Facebook, an incident involving Ramzy Alamudi and his wife at Macquarie University occurred on Friday 20th January 2017.

“The matter is now being investigated by NSW Police.

“The couple has been shaken by the incident and requests that their privacy be respected.

“They will not be providing any further commentary on the incident at this stage.

“Any reporting of the incident should be done responsibly.”

Watch the shocking video below.