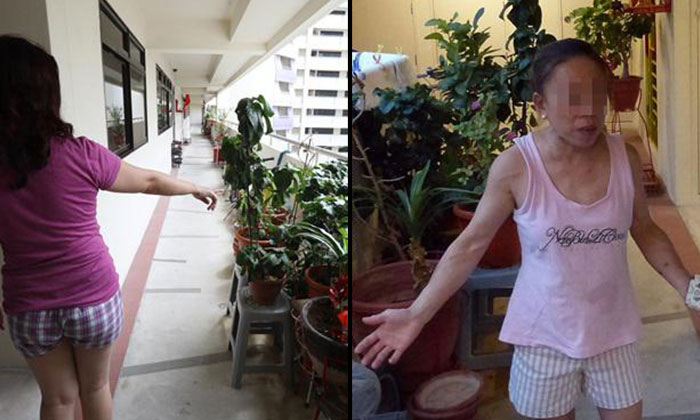 Two neighbours in Block 323B, Sengkang East Way, got into an ugly dispute over usage of the corridor and accused one another of killing each other’s plants.

There are currently three units that occupy said corridor, although one of them rarely use the common space, reports Lianhe Wanbao.

The other two got into an argument over the shared usage of the corridor.

One of the party in the argument, a 49-year-old resident told reporters that the dispute started back two to three years ago:

“When my neighbour started growing potted plants, she moved them to a part of the corridor just in front of my unit’s window.

“This is obviously wrong and an invasion of personal space.”

She also claimed that after she sought out her neighbour to discuss about this, the neighbour had ignored her, which led to an argument.

The other party, a 40-year-old resident told reporters that her neighbour was bossy and unreasonable, citing that the corridor was a common space and should be shared accordingly, instead of being hogged by any household, which she accuses her neighbour of doing:

“The corridor is shared by three flats, two occupying corners while one directly facing the corridor.

“If we abide by her logic, the houses at the corners would only get about a metre of corridor space, while the middle unit would monopolise almost all of it.

“This is just sheer greed.”

The Town Council has attempted to mitigate the dispute and advised her to move her potted plants, but she did not agree to it.

The grudge between the two worsened over time, and they started accusing each other of various exploits; the 40-year-old resident claimed that her potted plants was smashed by her neighbour, while her 49-year-old counterpart accused her of poisoning her plants.

The 40-year-old resident said that she tried to resolve the issue on various occasion, proposing to divide the corridor into three equal parts, but was rejected:

“She (The 49-year-old neighbour) said that as long as it’s in front of her windows, only her family can use it.”

A spokesperson from the Ang Mo Kio Town Council clarified that the corridor is a shared space, and should not be monopolised by any one unit.

Related Stories
Man allegedly kicks Uber driver's car at Boat Quay before punching him twice in the face
Cabby chases away patients at CGH for allegedly dirtying his taxi -- then kicks up big fuss with hospital staff
Man gets viciously punched, kicked and slapped by woman -- then gets ridiculed by netizens after that
neighbour
complaint
angry
town council
corridor
plants