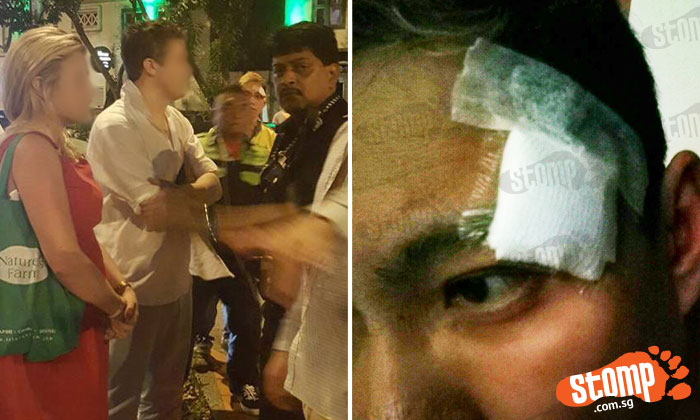 A man at Boat Quay allegedly kicked the door of an Uber driver's car before reportedly punching him twice in the face on Mar 4 at around 12am.

In a telephone interview, the 43-year-old Uber driver, Victor, told Stomp that he first heard a loud sound when he was driving off after dropping a passenger at Boat Quay.

He said the rear door of his car was kicked by a Caucasian man clad in a white shirt and jeans. There was a dent following the kick.

Victor alighted to confront the man.

Said the Uber driver about what happened thereafter:

"The man started shouting vulgarities at me.

"He then punched my face. My spectacles fell to the ground and I had a deep cut around my eye.

"He walked into the pub area after that.

"I went to find my spectacles. After that, I went to my car to call the Police and to stop the bleeding from the cut.

"However, for some reason I had no signal on my phone.

"I alighted the car to try to improve the connection. I was cleaning my wound with one hand and trying to call the Police with the other.

"As I was doing so, the man came back and punched me on on the lips before walking back to the pub area like what he did previously. I was left with another cut near my mouth.

"After that I managed to reach the Police.

"I also requested for help from friends who were also Uber and Grab drivers. Some of them were in the area.

"More than 10 of them arrived and went to look for the man.

"The Police also came. I gave a statement at Boat Quay and gave a description about the man who punched me.

"About 45 minutes later, I happened to see the man and his companions trying to board a taxi.

"I informed my friends and the Police and they managed to stop him.

"He was taken back to the station to assist with investigations."

The cut near Victor's eye had to be closed with medical glue to minimise scarring.

Repairs to his car amounted to about $200.