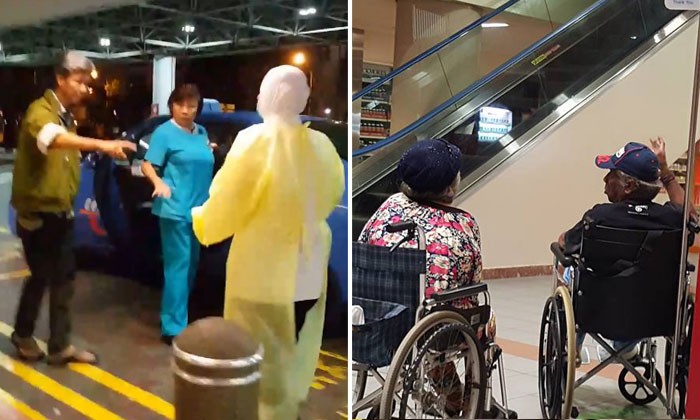 Videos circulating online shows a cabby kicking up a fuss at a taxi stand at Changi General Hospital after allegedly claiming that a patient had dirtied his vehicle.

According to a caption on the videos, the incident took place yesterday (Mar 4) at around 1.30am.

In a telephone interview, netizen Khairul Nizam who posted the videos on his Facebook page, said that he first saw a screening officer assisting a wheelchair-bound woman into a taxi at the taxi stand.

The woman's husband was with her. He too was wheelchair-bound.

Shortly after the couple boarded the taxi, the cabby alighted and told them to get off.

The cabby allegedly claimed that the woman peed in his taxi.

He then confronted the screening officer who was assisting the woman out of the vehicle.

He wanted the hospital to clean up the mess left by the patient.

In one of the videos, he can be seen speaking rudely to a cleaner and the screening officer at the scene. He was also making gestures as he was talking to them.

At the end of the video, he locked his taxi and proceeded to walk to the Accident and Emergency counter.

A second video shows the cabby talking to a woman believed to be a supervisor.

He asked her to look into his vehicle, possibly wanting to show her what was left in the taxi by the patient,

The supervisor responded by saying:

"So what you want us to do for you? Where's the urine?"

Khairul said that the cabby left after realising that there was nothing the hospital can do.

He along with two other men helped the couple book another taxi.

A blanket was given to her by the hospital that was placed at the backseat of the taxi.