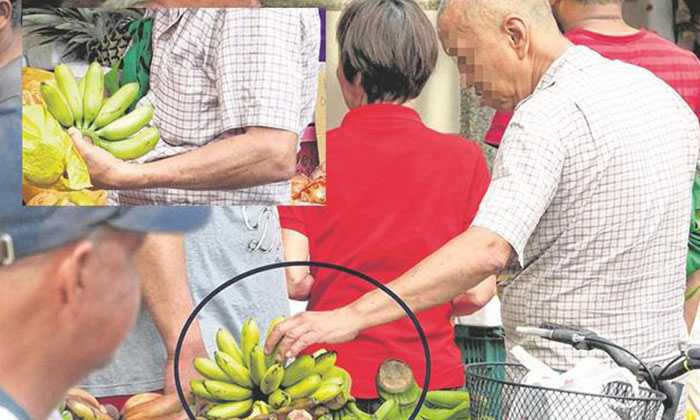 Boon Lay’s infamous 66-year-old beggar uncle was spotted not only soliciting money from diners at Boon Lay Place Food Centre , but also placing a bunch of bananas that were unpaid for in a bag on Monday (Feb 6).

The uncle only abandoned his loot and fled upon discovering that he had been tailed by reporters, reports Lianhe Wanbao.

The same elderly beggar had become infamous following a exposé by Lianhe Wanbao on Jan 24 last month, where he would sit on the same table as customers at Boon Lay Place Food Centre, before asking them for money to buy a meal.

He would also reproach individuals who reject his offer.

The uncle has also been accused of theft on multiple occasions.

Unsurprisingly, he was not there to queue, but rather to solicit funds.

The uncle left to try his luck at the wet market next to the hawker centre after realising that many customers were indifferent to him.

He was then spotted loitering at a fruit stall where he deftly placed a bunch of bananas into a yellow plastic bag he was carrying when he thought that no one was looking.

He used his body to block the stall owner’s line-of-sight before taking the bananas.

The act was witnessed by multiple reporters from Lianhe Wanbao, who approached him after tailing him for another 20 metres.

The uncle told reporters then he had trouble finding a job and had to depend on begging to feed himself.

He even asked them if they had a job to introduce him to.

However, when a reporter mentioned the bananas he took, the beggar started pleading:

“Are you going to report me?

“I’ll return the bananas, but I’m afraid he (the fruit stall owner) will report me to the police.

“Can you help me to return them?”

The beggar then tossed the bananas on the bonnet of a car parked nearby and left.