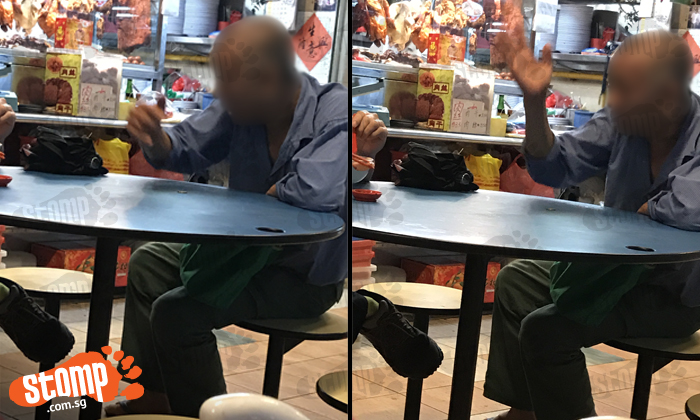 According to the Stomper, the man will sit with a diner to avoid drawing attention to himself, before asking the diner for some money to buy a meal.

“If you refuse to give him money, he will start to lecture and scold you,” said Janet, who was approached by the man for the second time this morning (Jan 23).

“‘Why $1 you also don't have, I only ask $1, not much why you don't give, your handphone few hundred dollars why no have $1 to give me, government never give me work, you work got money, why cannot give to old man like me.....‘“

Janet said that most of the shop owners at the hawker centre are aware of the man’s antics and do not take the man’s orders as he does not pay for his food.

“He will sit with you till you either take your food and change table, or just give him money.”

“If you need money, sell tissue or something… don’t just go around begging for money.

“I think it’s very sad and very nasty that he doesn’t want to work and has to resort to this.”