Scammer auntie caught on third video cheating shopkeeper: Does anyone know who she is? 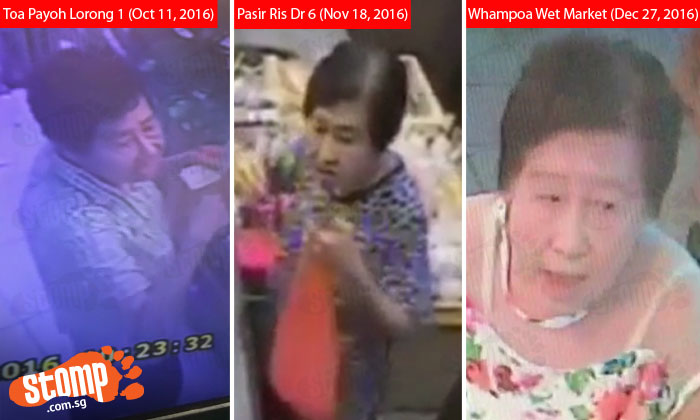 An elderly woman who was caught twice on video tricking shopkeepers by pretending to drop her change and then claiming that the change given was short, has been caught on video again, this time at Toa Payoh Lorong 1.

Stomper Christine had alerted Stomp to a previous incident that happened at Pasir Ris Drive 6 on Nov 18, 2016.

Stomp then put up another report yesterday (Feb 6) after Stomper Yeowhwa sent video footage of the woman in action at his fish stall at Whampoa Wet Market on Dec 27, 2016.

A few Stompers reacted and commented on the latest report on Facebook, saying that they had encountered the woman before as well.

Stomper Penny informed Stomp that she was a victim of the auntie's change dropping trick when she visited her father's household store in Toa Payoh Lorong 1 on October 11, 2016.

"I was alone in the shop that day when this auntie came.

"She bought some household products from me and paid me $50.

"I gave her the change, then she suddenly asked me whether I sold electrical bulbs but she couldn't remember which kind, so she said she will bring a sample over.

"After that, she said I shortchanged her of $10.

"You can see from the video that she already pocketed the $10 note while pretending to ask me questions about the light bulb."

According to the Stompers who have encountered this auntie, her trick is to quickly pocket some change and then distract and confuse the shopkeepers before telling them that they have shortchanged her.

If you have any information about this auntie or know who she is, please write in to stomp@stomp.com.sg or WhatsApp 9384 3761.

Watch the latest video of the incident at Toa Payoh Lorong 1 below.

Watch the video of the incident at Whampoa Wet Market below.

Watch the video of the incident at Pasir Ris Drive 6 below.